Ammonia/CO2 south of the border 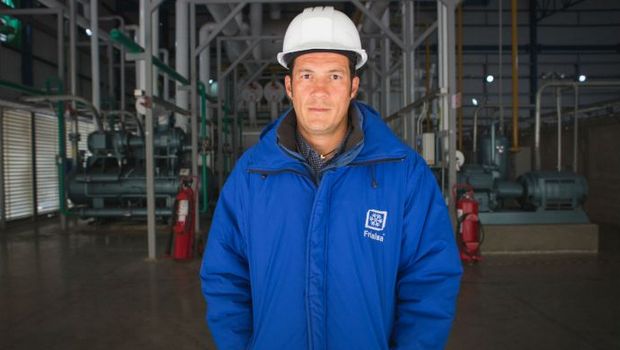 But a growing number of end users in North America in both sectors are finding that the marriage of the two natural refrigerants within a single refrigeration system can offer advantages that each refrigerant can’t necessarily deliver alone.

And even in food retail, four U.S. supermarkets have installed an ammonia/CO2 cascade system, including a Piggly Wiggly store in Columbus, Georgia.

South of the border, the natural-refrigerant tandem is also bearing fruit, as Frialsa Frigorificos, Mexico’s largest cold-storage operator, has made NH3/CO2 its standard refrigeration system. Starting in 2010, Frialsa now uses this technology at five of its 24 facilities

Four of the five plants – in Monterrey, Tepeji del Rio, Toluca, and Veracruz – were constructed with an NH3/CO2 cascade system from M&M Refrigeration, while at the fifth – in Culiacán Sinaloa – an expansion of the facility has been equipped with a packaged NH3/CO2 unit from Tewis (installed by Bohn). Frialsa plans to install NH3/CO2 cascade system this year at two new plants encompassing 26 million cu. ft.

Overseeing Frialsa’s transition to NH3/CO2 technology is Ricardo García, director of engineering and projects, who joined Mexico City-based Frialsa in 1994. He is responsible for all of Frialsa’s environmental projects, including management of energy generated at wind farms and delivering 50% of electricity needs at 12 Frialsa warehouses.

Comprising 66.2 million total cubic feet. across its 24 facilities, Frialsa is not only the leading cold-storage operator in Mexico and Latin America, but also one of the largest in North America. It is a member of The World Group, a North American partnership of independent refrigerated/frozen food warehousing companies.

The 34-year-old company offers refrigerated and frozen storage and transport to a wide range of products, including fruits and vegetables, dairy, meat, seafood, deli, bakery and ice cream – “every kind of food you can imagine,” said García. Its extensive logistics network makes about 150,000 deliveries annually.

The temperatures produced at the Tepeji plant in four convertible freezing/cooling rooms range from -13°F for freezing (beef, poultry, pork, ice cream and seafood) to 40°F for cooling (milk, yogurt) and 40°F at the dock. The capacity of the plant runs between 700 and 800 TR. (At its Monterrey, Mexico, warehouse, Frialsa’s NH3/CO2 system handles blast freezing down to -30°F.)

“We have to freeze a lot of product,” he said in an interview with Accelerate America. “We were hearing that if you go to low temperatures, the energy efficiency of CO2-ammonia would be better than regular ammonia systems.” Frialsa’s conventional ammonia systems include two-stage and gravity-flooded recirculated systems. (It also operates some plants with R507A or R404A.)

US Cold Storage has reported that its NH3/CO2 cascade systems are on average 5.8% more energy efficient than a conventional ammonia system. Frialsa has found the average energy efficiency of its NH3/CO2 systems to be even greater – between 15% and 20%, depending on local electricity rates, said García, noting that the lower the temperature, the greater the efficiency of the system. “Consumption of energy will be lower working with CO2-ammonia.”

Moreover, as García started bidding for NH3/CO2 cascade systems vs. regular ammonia equipment, he found to his surprise that capital costs were comparable. “You may buy more equipment with CO2-ammonia but at the end of the day the cost is real similar [to a conventional system],” he said. Installation costs are also about the same.

García noted that Frialsa did not receive government incentives or loans for installing the NH3/CO2 equipment. Mexico’s government offers low-interest loans to help finance the installation of energy-efficient equipment.

In NH3/CO2 cascade systems, ammonia, a potentially toxic chemical, is confined to the engine room, vastly reducing the charge compared to what is used in conventional ammonia systems, and greatly improving the safety of plant employees. Ammonia is employed simply to condense CO2 into a liquid, which is the only refrigerant channeled to the cooling and freezing areas.

For example, at the Tepeji plant, the engine room, which is located next to – but outside of – the main storage building, employs about 1,100 lbs. of ammonia (in concert with about 30,000 lbs. of CO2), compared with 10,000-15,000 lbs. of ammonia at conventional facilities. (Frialsa’s other NH3/CO2 cascade systems use a similar amount of ammonia and CO2.)

This year, Frialsa installed its first ultra-low-charge ammonia/CO2 packaged unit to support the expansion of its Culiacán Sinaloa plant. Frialsa is contemplating using the packaged unit in future expansions of its four NH3/CO2 warehouses, García said. The unit contains only about 200 lbs. of ammonia and roughly 10,000 lbs. of CO2; like the M&M system, it confines ammonia to the high side and uses only CO2 in the cooling/freezing areas. “It could be on the roof, but we are putting it on the ground outside the building,” said García.

In addition to cost and energy considerations, it is very important for Frialsa to remove ammonia from cooling and freezing rooms. “When you think about ammonia leaks, we decided to put it just in the engine room – there is less ammonia, and less risk,” said García. “We’re fine with ammonia, but if you can reduce the amount, it is a great relief.”

Using CO2 in the freezing and cooling areas rather than ammonia also helps safeguard stored food products in the event of a refrigerant leak. “A lot of our customers are happy about that,” said García. “Our insurance company is, too.” Some of Frialsa’s customers specifically request storing their products at facilities that use NH3/CO2 refrigeration.

Government regulations are another factor favoring adoption of NH3/CO2. In Mexico, anything over 22 lbs. of ammonia can qualify an industrial facility as “high risk” by the Ministry of Labor and Social Welfare (STPS), said Garcia.

But low-charge systems require less documentation and less demanding emergency plans than a conventional ammonia plant. “If we have a leak, we have ammonia just in the engine room; we don’t have to move all the people outside the building, as we would do if there was an ammonia leak in the building.”

STPS’s safety requirements and enforcement are very similar to those set in the U.S. by the Environmental Protection Agency and the Occupational Safety and Health Administration, noted Garcia. And, as in the U.S., governmental inspections at facilities that use ammonia have been stepped up in Mexico, he said.

When M&M Refrigeration installed Frialsa’s first NH3/CO2 system in Toluca in 2010, M&M trained Frialsa’s internal and third-party technicians on how to maintain the technology. Since then, said Garcia, “we’re dealing only with Mexican technicians” (at contractor Watco S.A. de C.V.) who know how to work with NH3/CO2 systems.

One key maintenance consideration is the upkeep of the cascade condensers that condense CO2 by evaporating ammonia. They are designed to keep the two refrigerants from mixing; however, if they did come in contact, they would form ammonium carbamate, a white, powdery salt that tends to clog pipes and valves. “We have not experienced this problem,” said Garcia.

Another technical requirement is eliminating moisture, which reacts with CO2 to create corrosive carbonic acid. To accomplish that, Garcia pulls a vacuum during the start-up of the equipment that lasts for several days.

The interest in NH3/CO2 systems among cold-storage operators is growing in Mexico, said Greg Robison, vice president of sales for M&M Refrigeration. In addition to the four Frialsa plants, a La Vista facility in Zamora, Mexico, is using M&M’s technology, and M&M has received four to five more bids in the country, he said. “Requests in Mexico are pretty strong. That’s mainly because we got our foot in the door at Frialsa. People down there are starting to say, ‘This is a good thing; let’s think about switching.’”