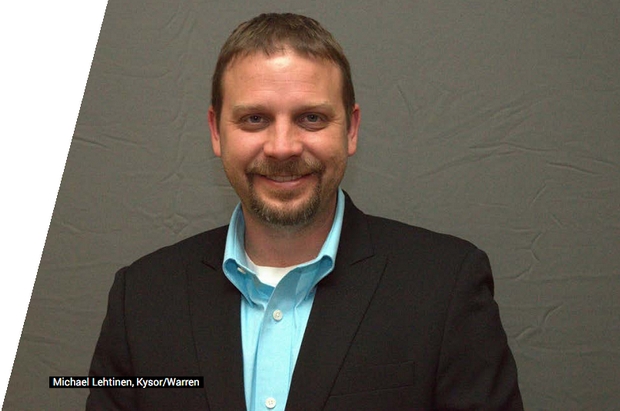 Kysor/Warren, a division and brand of global refrigeration equipment maker Heatcraft Worldwide Refrigeration, is optimistic that deployment of natural refrigerant technologies will expand in the U.S., but the company admits there are some obstacles to overcome.

Over the past two years, the Columbus, Ga.-based company, which was acquired in 2011 by Stone Mountain, Ga.-based Heatcraft (itself a unit of Lennox International), has been actively promoting a variety of natural refrigerant systems, including transcritical CO2 and CO2 cascade systems, notably an ammonia/ CO2 cascade unit.

Kysor/Warren’s 2015 placement of an ammonia/carbon dioxide cascade refrigeration system at a newly constructed Piggly Wiggly supermarket near its headquarters in Columbus was only the fourth such system installed and operating in the U.S.

The company promises that another retail ammonia refrigeration installation is forthcoming. In addition, Kysor/Warren designed and manufactured an ammonia/CO2 system for a Fresh & Easy Neighborhood Market outlet, but that chain declared bankruptcy and closed its stores a few years ago.

The emphasis on ammonia/CO2 technology is enabling Kysor/Warren to distinguish itself in the increasingly competitive natural refrigerants marketplace.

“There was a reason we have spent the time on ammonia technology here in the U.S., and it was to set us apart and not take a ‘me-too’ approach,” said Michael Lehtinen, director of marketing, Kysor/Warren.

Kysor/Warren also wanted to provide supermarket operators with a natural refrigerant alternative that was viable in warmer climates, where CO2 transcritical booster systems can be less efficient without new add-on technologies.

“There’s got to be a better mousetrap for the people in the high ambient [temperature] environments,” he said.

Turning to ammonia was an obvious solution, Lehtinen said, citing the technology’s proven history as a refrigerant. “The technology used for ammonia cooling has been stable for decades,” he said, and he is confident in the safety measures employed to secure the ammonia, which is restricted to the rooftop. “We believe with the next installation, ammonia’s reputation will be established, paving the way to many more opportunities.”

In addition, ammonia refrigeration technology has an established base of trained technicians who have been installing and maintaining ammonia systems in industrial cold-storage applications. In fact, Lehtinen pointed out, most supermarket operators likely have a relationship with a wholesaler that already has an ammonia refrigeration system in its warehouse.

Focusing primarily on the food retail industry, Kysor/Warren operates both independently and in tandem with its sister brands based at Heatcraft headquarters in Stone Mountain, Ga. and other Heatcraft divisions located abroad. Overall, Heatcraft is “very cohesive” on a global basis, said Lehtinen.

Kysor/Warren’s CO2 cascade and transcritical systems were developed and first commercialized by Heatcraft’s business in Europe. “Then they were deployed in Australia and then we adopted them in the U.S., modified for this market,” he said.

Globally, Heatcraft (including Kysor/Warren), which did $713.3 million in refrigeration sales in 2015, has installed 249 HFC/CO2 cascade and secondary systems, and 11 transcritical systems. More of all types are coming, said Lehtinen. Europe has the “lion’s share” of installations, followed by the U.S. and Australia.

In the U.S., about 9% of Kysor/Warren’s business is in equipment that contains natural refrigerants. (Kysor/Warren has also installed one transcritical rack in Canada.)

What are the prospects for natural refrigerant systems in the U.S.? “We have found that anywhere from one to two new retailers per year dip their toes in the water and try it,” said Lehtinen. “But then they want to wait about three years to see how their experience goes. That’s why the growth has been slow.” But he expects faster growth over the next two to three years “now that trial sites have had time to form a decision about adoption.”

The negatively perceived efficiency challenge for transcritical units in warm ambient conditions, along with the lack of trained technicians for CO2 systems, remain key obstacles that the natural refrigerant market industry has yet to fully overcome, he said.

While its transcritical CO2 booster system has not yet used technologies designed to make it more efficient in warmer climates, such as adiabatic coolers, parallel compression and ejectors, Kysor/Warren has completed lab validation of these components on a fully functional system, said Lehtinen. In fact, he added, the company recently agreed to install within the next 12 months a system using parallel compression and ejector technology.

“In some of the initial trials, I think end users were expecting to see pretty significant gains in efficiency, and that just didn’t materialize, because of the maturity level of the technology,” he said. However, the development of ejectors, parallel compression, and other systems have delivered improved results, even in warm environments, over early trials, particularly in Europe. He said he expects interest in transcritical to ramp up in the U.S. in the next year or two as more trials show better results.

“Every year there seems to be more innovation to make it more efficient than — or at least on par with — any HFC systems that you would install,” Lehtinen said.

Moreover, the presence of trained CO2 technicians is growing in parts of the U.S. with more CO2 installations, such as the Northeast, but they will need to keep up with continuing changes, he added. Kysor/Warren is helping with a new YouTube program that provides training videos, along with tips on its Facebook page. 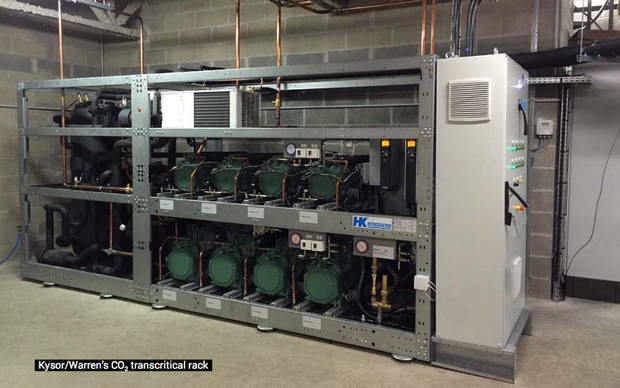 The efficiency of natural refrigerant systems vs. that of HFC systems can often be difficult to assess because of the varying locations and conditions of the stores in which they operate. To overcome that issue, Kysor/Warren compared the ammonia rack in the Columbus Piggly Wiggly with an HFC rack housed in the same store; it found that the NH3 rack delivered a 22% gain in energy savings.

But that still might not be enough to persuade some supermarket operators to try the ammonia/CO2 system due to its higher upfront costs. According to Lehtinen, the NH3/CO2 cascade systems carries a premium of 40% to 70% over a traditional HFC system, while the premium for a transcritical system is about 20% to 40%.

Some of the more progressive retailers have been willing to trial natural refrigerants despite higher upfront payout. But others are unwilling to invest without a maximum three-year payback, despite the potential for long-term energy savings over the lifetime of the equipment, he said

“If you are at a supermarket chain and you put a proposal on your CFO’s desk, and say you want to go to alternative refrigerants, and your payback period is 4-1/2 or five years, they will likely say, ‘OK, come back when you get it down under three.’”

An ammonia/CO2 cascade system is close to meeting that standard, requiring three years or more for a retailer to earn a payback on the premium over the cost of an HFC system, he said. The ROI for a transcritical system is about the same in northern climates, but longer in warmer locations.

In a cost comparison of ammonia/CO2 with transcritical, the former is usually more efficient while the latter costs less upfront. But the further north of the Mason-Dixon line one goes, the more favorable the the total cost of ownership for transcritical becomes, Lehtinen noted. In both cases, “first costs need to come down” to stimulate adoption.

Lehtinen hopes more retailers employ total cost of ownership as their method of analysis, “but they just haven’t embraced it yet,” he said. Still, he believes there is “room for the industry to mature” around evaluation of total lifecycle costs — especially when an equipment lifecycle of 20 to 25 years is taken into consideration.

Even with increasing regulation of HFC refrigerants, many U.S. retailers have been reluctant to embrace natural alternatives. For one thing, regulations still lack “sharp enough teeth,” said Lehtinen. In addition, as long as viable drop-in artificial refrigerants — such as HFO blends — are available and affordable, retailers will “travel the path of least resistance,” he said.

But Kysor/Warren is playing its part in supporting natural solutions. “I can assure you that when we engage in discussions with retailers about what they are looking for, we make sure we put the [natural refrigerant] options in front of them and work through whatever business cases they could generate to show the opportunity.”