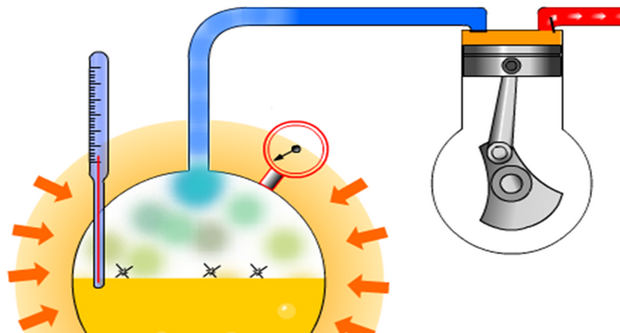 It is not uncommon, when doing trainings on metering devices in general, but specifically it seems with TXV’s that there is a perception that the TXV is responsible for controlling the temperature in the evaporator. Lets look at a TXV equipped system and how it behaves.

Some other factors that control evaporator temperature with a TXV are:

Evaporator rated capacity: When we size components, we do so that they will all have a similar capacity at the desired operating conditions. If the evaporator is undersized compared to the compressor, then it will operate at a lower temperature than what is desired. Vice versa if it is oversized.

Air flow: If the airflow through the evaporator is reduced for whatever reason, or even if the coil is iced up or dirty, then heat flow will be restricted. The TXV responds by throttling closed. As we saw above, this will result in a reduced evaporator temperature. It will also result in low evaporator superheat. (This is also a critical time that you hope the TXV sensing bulb is securely mounted and insulated!)

Latent load: I have ran into situations where a lack of understanding concerning wet bulb and load led to some unneeded superheat adjustment with predictable results. Residential AC is probably the best example of this around. I find that those who do not understand wet bulb also do not use charging charts either. The reason is obvious. You need to use wet bulb to use a charging chart. Since the dry bulb temperature in AC systems is high compared to refrigeration, it can also hold a lot more moisture. This moisture is latent heat and it is a heat load on the evaporator. If it is high, expect a higher evaporator temperature. If you increase the RH in a room temperature space say 20%, then expect a rise of at least several degrees in the evaporator.

Outdoor ambient: This does not have nearly as much to do with heat load from outside as it does on it’s effect on condensing pressure. When the temperature outside is 75F, your condensing pressure is a lot lower than when it is 95F outside. When the ambient temp is low, the lower pressure differential across the TXV will require it to open more to get the same feed. If the ambient gets too low and you have no way to maintain adequate condenser pressure, then the capacity of the TXV can drop to the point where it behaves like a much lower capacity valve. Expect low evaporator temperatures and high superheat.

Refrigerant charge: Suffice it to say that if you do not have enough refrigerant in the system, expect low evaporator temperatures and high evaporator superheat. In AC, you may see ice at the inlet of the circuits. Also expect your condenser subcooling to be in the toilet and to have flash gas at the TXV inlet. One thing to remember is that a blockage in the liquid line will also give you flash gas and low evaporator temperatures, but the difference will be that the condenser subcooling will not be low as it is when the system is undercharged.