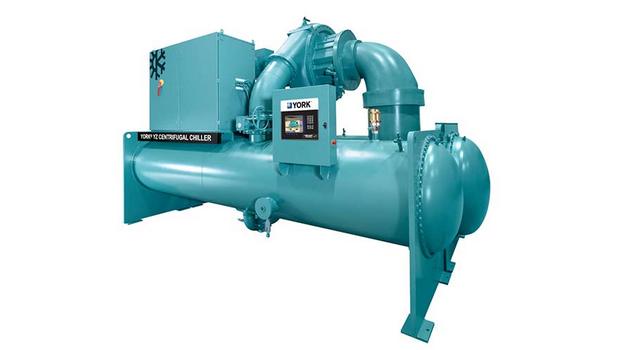 Johnson Controls has extended the capacity range of its York YZ R1233zd(E) centrifugal chiller to 1,350 tons (4747kW) of refrigeration.

The York YZ chiller, introduced in January last year, is the first chiller fully optimised for use with the low GWP HFO refrigerant, initially with a capacity range of 165 to 1,000 tons (580 to 3516kW).

The YZ can operate with entering condenser water temperature as low as 4.5°C. The chiller can also operate with condenser temperatures below the evaporator temperatures, eliminating the need for a water-side economiser, which simplifies the system, requires less mechanical room space and saves money on components, piping, controls and maintenance.

The use of an integral, variable speed drive and advanced magnetic bearing technology is said to bring enhanced reliability, reduced maintenance and improved efficiency. It claims enhanced performance in every operating condition and the widest operating envelope in the industry. Compared to traditional fixed-speed oil-bearing chillers, the YZ is said to deliver up to 35% annual energy savings.

The chiller will be a major feature of the Johnson Controls display at this month’s AHR Expo in Atlanta.