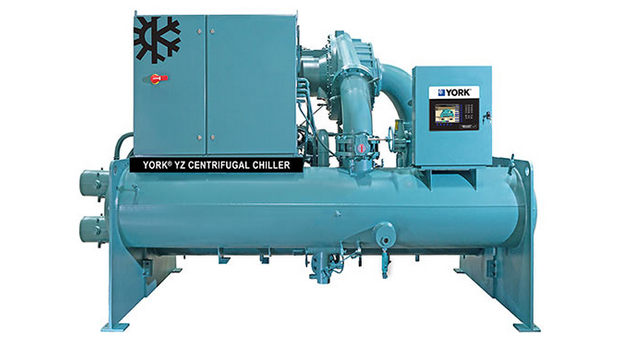 Johnson Controls’ new York YZ centrifugal chiller is said to be the first such machine designed specifically for use with low GWP refrigerant R1233zd and using magnetic bearing technology.

The result of more than three years of development and more than 75,000 hours of testing, today’s global launch brings immediate availability of a full range of machines in capacities from 155-1000 tons.

While other manufacturers have previously introduced chillers using this new refrigerant, Johnson Controls claims that this is the first such chiller to be designed by optimising every component around R1233zd. This approach, allied with oil-free magnetic-bearing compressors and variable speed technology, is said to have enabled the YZ chiller to achieve the ultimate performance.

The YZ can operate with entering condenser water temperature as low as 4.5°C. The chiller can also operate with condenser temperatures below the evaporator temperatures, eliminating the need for a water-side economiser, which simplifies the system, requires less mechanical room space and saves money on components, piping, controls and maintenance.

The use of an integral, variable speed drive and advanced magnetic bearing technology is said to bring enhanced reliability, reduced maintenance and improved efficiency. It claims enhanced performance in every operating condition and the widest operating envelope in the industry. Compared to traditional fixed-speed oil-bearing chillers, the YZ is said to deliver up to 35% annual energy savings.

The YZ chiller will be a major feature of the Johnson Controls stand at this month’s AHR Expo in Chicago. It will also be on display at Mostra Convegno Expocomfort in Milan in March and China Refrigeration & Heating in April.