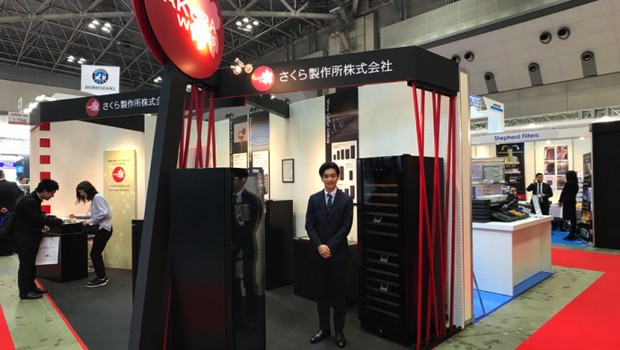 Small companies are showing leadership in moving the Japanese market to wider adoption of hydrocarbons, as evidenced at this year’s HOTERES 2018 tradeshow held in Tokyo, Japan from 20-23 February.

Japanese wine cellar manufacturer Sakura Works Inc. told this website it would be shifting its entire product portfolio to R600a, beginning in April this year.

“It was in 2014 when we first developed a wine cellar using R600a in Japan,” said Sakura Works Inc. CEO Aki Hozumi.

Sakura Works Inc. is a small company with only about 15 employees, but it is unique in that it manufactures as well as does the design and R&D of its products in Japan.

It was an easy decision for the company to move completely to hydrocarbons, explains Hozumi.

“By switching the refrigerant to R600a, annual power consumption can be reduced by 30 to 35%,” he said.

“In the wine cellar industry, I think that end users place more emphasis on ‘energy efficiency’ rather than the environment. With respect to refrigerants and energy efficiency, we aim to increase our lineup of environmentally conscious products in the future.”

Hozumi revealed that the company’s sales were considerable and growing.

In another sign of growing hydrocarbon market share in Japan, Chinese light commercial system manufacturer, JCM Co. Ltd.‘s informed this website that their sales of hydrocarbon units (R290 and R600a) were growing at a rate of 20-30% year over year.