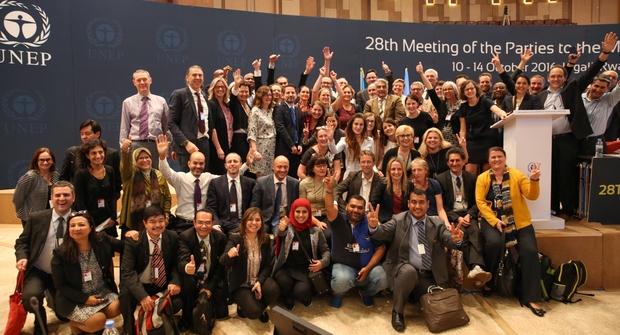 The European Commission has adopted a proposal for the EU to ratify the amendment to the Montreal Protocol on a global phase-down of hydrofluorocarbons (HFCs), tackling the rapid growth of emissions of these potent greenhouse gases.

The proposal follows the agreement reached last October in Kigali, Rwanda, where the 197 Parties to the Montreal Protocol agreed to gradually limit their production and use of HFCs. In developed countries, first reductions are due in 2019. Most developing countries will freeze the level of HFC quantities in 2024, and a few countries will follow in 2028.

For the Kigali Amendment to enter into force by 2019, at least 20 Parties need to ratify it. Ratification by the EU countries alone could thus trigger the entry into force.

Commissioner for Climate Action and Energy Miguel Arias Cañete said: “Not only will this landmark deal help us meet our climate objectives, but it will also provide new opportunities for European manufacturers of air conditioning and refrigerants to access the global market, creating additional jobs and attracting new investment.”

The implementation of the legally binding Kigali Amendment will make a significant contribution to the Paris Agreement objective of keeping global temperature rise well below 2°C.

The EU has already taken action to reduce HFCs and prepare for the global phase-down by adopting in 2014 the EU Regulation on fluorinated greenhouse gases, which enables the EU and its Member States to ratify rapidly.

Other countries are encouraged to take early action as well, in particular those where the demand for refrigeration and air-conditioning is growing fast. This would accelerate investments in climate friendly technologies and spur economic growth.

HFCs are manmade substances used mainly in refrigeration and air-conditioning equipment. They have a global warming effect up to 15.000 times greater than carbon dioxide. Their use is the fastest growing source of greenhouse gas emissions.