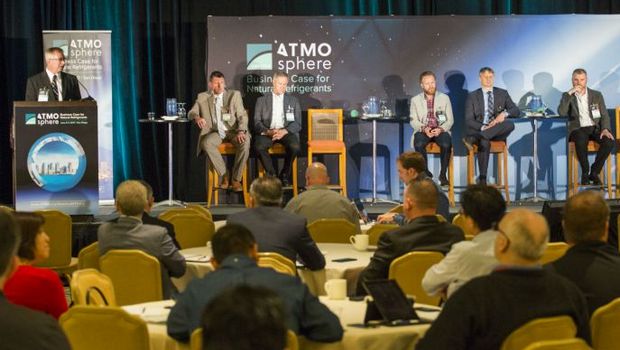 Whole Foods, Target, Hannaford Supermarkets and even the US Defense Commissary Agency (DeCA) have ramped up their natref use.

In a sign of the growing popularity of natural refrigerant-based HVAC&R systems in the United States, Whole Foods, Target, Hannaford Supermarkets and even the U.S. Defense Commissary Agency (DeCA) announced plans to ramp up their use of CO2 transcritical.

Tristam Coffin, director of sustainability and facilities at Whole Foods Market, told ATMOsphere America 2017 in San Diego, Calif. that his company would retrofit 15-30 stores per year with natural refrigerant-based systems.

“We’ll evaluate the effectiveness of our CO2 transcritical systems for future use,” he added.

The company has already embraced hydrocarbons in a big way. “Most stores in our chain now have some kind of hydrocarbon technology in them […]. Well over half of our stores utliise natural refrigerants,” Anderson declared.

Currently the contractor has five CO2 stores – four transcritical and one cascade – based in the New York/New Jersey area.

“We’re education-based. We have in-house training to help ease concerns regarding the transition from standard DX or glycol systems to high-pressure CO2 refrigeration systems,” Savage said.

“It met the criteria for a retrofit to CO2 TC, supporting the corporate goals [of European parent company Ahold Delhaize] of ODS [ozone-depleting substances] phase-out and GHG [greenhouse gas] emission reduction,” he said.

Paul Alway, formerly of UK retail giant M&S and Tesco, is bringing his natural refrigerant experience to bear at his new home, the AB Group.

“CO2 and natural refrigerants are business as usual for M&S and Tesco now,” Alway told the retail panel at ATMO America.