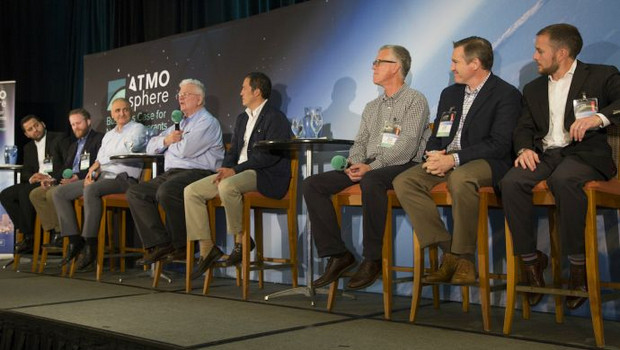 Thanks to their superior efficiency over HFC-based systems, uptake of HVAC&R systems based on natural refrigerants CO2, hydrocarbons and ammonia is poised to increase in the United States regardless of the challenging regulatory climate, heard participants in the ATMOsphere America conference in San Diego at 5 June.

“To improve the sustainability of our operations, we need to take a deep look at natural refrigerants. Over the coming years it will make more and more sense to invest in these technologies,” said Fernando Campos, deputy director for sustainability infrastructure at the Mexican branch of U.S. retail giant Walmart.

Last Thursday (1 June), U.S. President Donald Trump announced that the United States would pull out of the landmark Paris Agreement on mitigating climate change. Yet a broad majority of experts polled at ATMOsphere America expect the adoption of natural refrigerant-based HVAC&R systems to continue regardless.

“We’re on the verge of global change. We think there is a business model in place and a pathway towards better refrigerants,” said Campos.

Whole Foods Market is another retailer that is driving the adoption of natural refrigerant-based HVAC&R systems in the Americas. 22 of its 465 stores in the United States currently operate with hydrocarbons, primarily in the San Francisco Bay Area.

“True and AHT have dedicated their cases to propane (R290) almost exclusively, so retailers will be buying natural refrigerant-based systems whether they know it or not,” said Tristam Coffin, director of sustainability and facilities at Whole Foods Market.

He argued that R290 is already a mainstream solution in food retail today – particularly in mixed-use buildings that lack space for larger rack systems.

“OEMS and end users alike are used to managing uncertainty in the marketplace. We want to streamline our approach to system design, and we’re certainly not going to build inefficient systems,” Coffin said.

“It’s not just about regulation. These are good refrigerants. They’re efficient, and they work well. That’s why we’re all sitting in this room – not because we’re worried about regulation, but because we know that natural refrigerants have a positive effect on the environment and on our companies’ bottom lines,” he added.

“Regulation is part of the stick, but there are plenty of other carrots out there,” Coffin argued.

Jim Rutz from Tecumseh Products Company went even further. “The war is over. R290 is the solution for food retail.”

Making the case for choosing natural refrigerants, Gerard von Dohlen, president of Newark Refrigerated Warehouse, said: “How do you build a refrigeration system that copes with lack of certainty about regulation in the United States is going to go in the coming months and years? I’m trying to build systems that avoid uncertainty, because I don’t know what’s going to happen.”

Von Dohlen is convinced that ammonia, hydrocarbons and CO2 are the refrigerants of the future. “They are easy to handle and easy to use. The regulatory environment is just something that we’ll have to deal with. There’s nobody in this room who has a better guess than my cocker spaniel what Trump is going to do next!” he said.