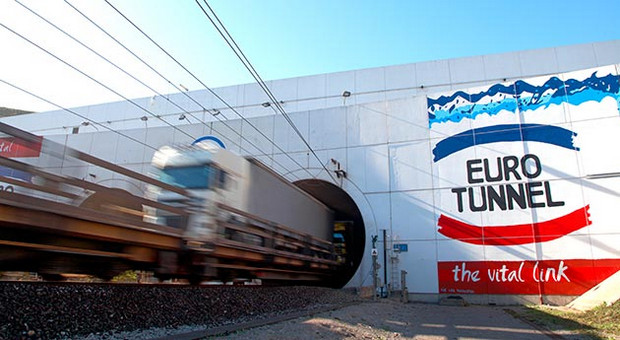 Initial results show that energy savings of 33% have been achieved by the new Trane CenTraVac chillers using the HFO 1233zd(E) to cool the Channel Tunnel link between the UK and France.

The figures released yesterday for Europe’s largest cooling system reveal an energy reduction of 4.8GWh, relating to savings of approximately €500,000 in 2017. Going forward, operators are confident that annual savings of around 40% can be sustained.

The four Series E chillers using the new HFO refrigerant 1233zd(E) have been installed over the last two years to mitigate the effects of the heat generated by the high-speed trains as they pass through the tunnel connecting the UK with France. They replaced eight ageing York Titan chillers which have served the tunnel since it opened in 1994.

Without round-the-clock cooling, the heat generated by high-speed trains passing through the 50.5km-long tunnel under the English Channel would drive indoor temperatures above 35°C, which is the maximum that can be reached while still running services in optimal condition. The new system ensures that ambient temperatures stay at or around 25°C.

The original solution developed at the time by York and Transmanche-Link, the British/French tunnel construction consortium, involved installing two systems of 24in diameter cooling water pipes, carrying 18.5 million gallons of water in a network totalling 300 miles in length. 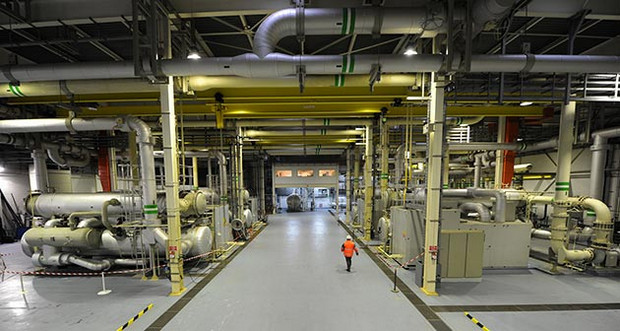 The original four York Titan chillers at Sangatte, just before their replacement

The chillers were replaced during the winter period when free-cooling via the plant’s dry-coolers carry much of the cooling load. 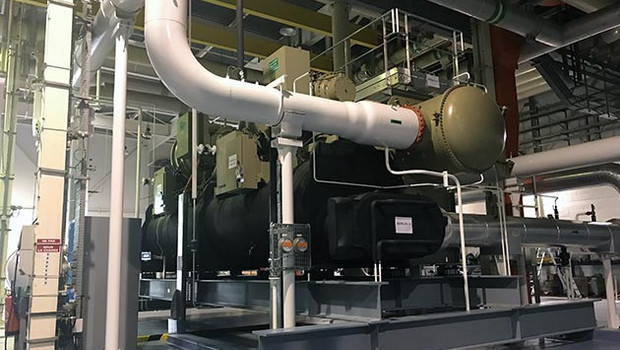 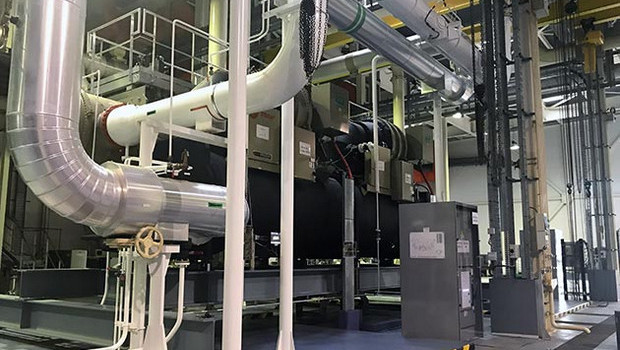 Each chiller is charged with around 200kg of R1233zd(E), a non-flammable refrigerant with a GWP of 1. It was designed as an alternative to the HCFC refrigerant R123 in low pressure chillers.

“We saw the replacement of the Channel Tunnel cooling system as a chance to reduce our energy consumption and carbon footprint,” said François Gauthey, deputy CEO of Channel Tunnel owner Getlink. “This effort required installing a new cooling system – Europe’s largest – to maintain the Channel Tunnel at optimal ambient temperatures. Honeywell’s Solstice zd refrigerant, with its ultra-low global warming potential, and Trane’s chillers, which are already being used to cool large buildings and infrastructure, provided the best combination of features to help us meet our energy and environmental goals,” he added.

Trane was the first company to develop a chiller for use with 1233zd when it launched the Series E CenTraVac in 2014. Jose La Loggia, Trane’s general manager commercial HVAC Europe, gave credit for Eurotunnel’s vision in adopting this new refrigerant technology. “When we worked together on this project these chillers were just out of the box,” he said. “No-one had worked with chillers like this before. They had the vision to trust us to deliver on what we said.”