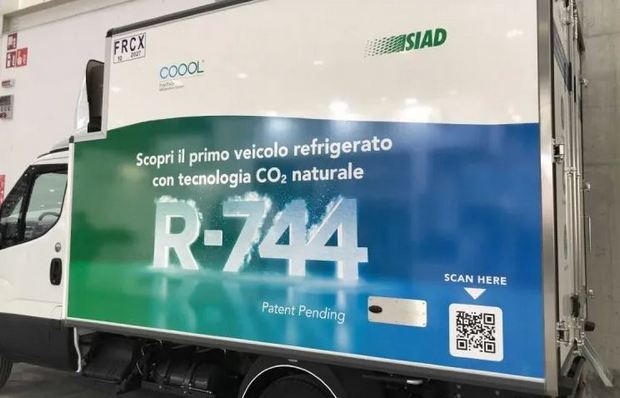 The system was showcased at REFRIGERA2021, held from November 3-5 in Bologna, Italy.

COOOL FreeToGo allows the “maintenance of the cold chain” inside a vehicle at a controlled temperature,” SIAD says on its website. It operates for both “mono and bi-temperature, for both fresh and frozen food.”

Unlike traditional transport refrigeration systems that employ vapor-compression systems or eutectic plates, SIAD’s system is compressor free and operates via the evaporation of CO2.

Notably, the system does not contribute any net CO2 emissions because the CO2 refrigerant it uses is obtained from the biogas released by organic matter and used to produce biomethane – an example of a virtuous cycle.

In the SIAD system, the CO2 gas does not enter the load space directly, eliminating the risk of under-oxygenation inside the vehicle, SIAD noted.

Because the system comprises few components, routine maintenance is reduced “to a minimum,” the company said. It also operates at “almost zero energy cost,” according to Italian refrigeration site Zerosottozero.

The system does not emit any noise during operation, said SIAD, which is an advantage during deliveries to residential areas.

Other features of the patent-pending system, according to SIAD, include the following:

In 2018, the Mediterranean Shipping Company (MSC), based in Geneva, Switzerland, announced that it started to lease 2,000 containers chilled by Carrier Transicold’s NaturaLINE-based refrigeration system.