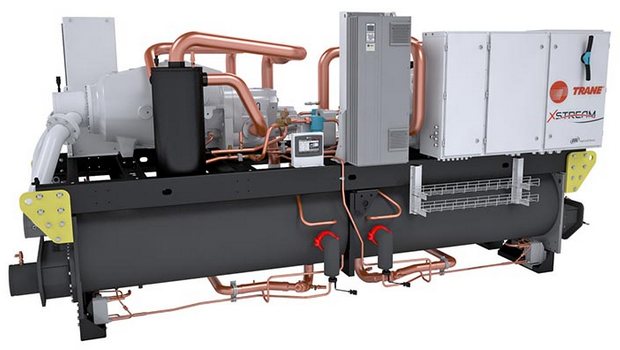 Part of Trane’s XStream range, the new RTHF G is now available in countries across Europe, Middle East and Africa.

The new units are said to feature the largest screw compressors on the market, which when used in a double circuit deliver capacity of up to 2700kW. In terms of performance, the RTHF G is said to achieve an EER of up to 6.3 and ESEER of up to 9.5 with variable speed.

In a market segment that could previously only use single circuit centrifugal chillers, the dual circuit configuration reduces refrigerant content per circuit and increases reliability. Efficiency is said to be increased further by the compatibility of the chiller’s serial counterflow design with the use of variable primary flow.

“RTHF G units address the needs of building owners who want to increase the sustainability of their operations, while maintaining or improving capacity, efficiency and reliability with critical, large capacity cooling installations,” said Jose La Loggia, vice president and general manager of Trane in Europe.