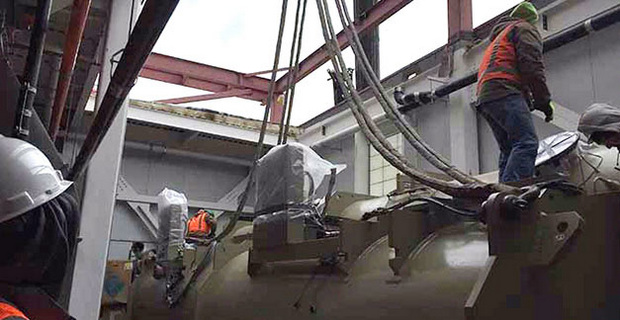 The University of Nebraska Medical Center (UNMC) has become the first establishment in the USA to install a Trane chiller using the new refrigerant R1233zd(E).

Based in Omaha, UNMC is one of the USA’s top five medical schools and has intentions to become climate neutral by 2050.

The 3,700 ton Trane chiller was installed in early December in the facility’s central utility plant. It will serve the university’s newly opened Lauritzen Outpatient Center and the UNMC Center for Drug Discovery and Lozier Center for Pharmacy Sciences and Education, as well as the Fred & Pamela Buffett Cancer Center, with capacity to spare for future buildings.

The chiller was factory tested, shipped, tested again, disassembled into four pieces, and then craned into the plant room – which had a section of roof removed to provide access and special support structures in place to move the chiller to its permanent home inside the building.

R1233zd(E) is non-flammable HFO refrigerant and boasts a GWP of just 1. Trane was the first to adopt the new gas in a range of CenTraVac chillers introduced in 2014.