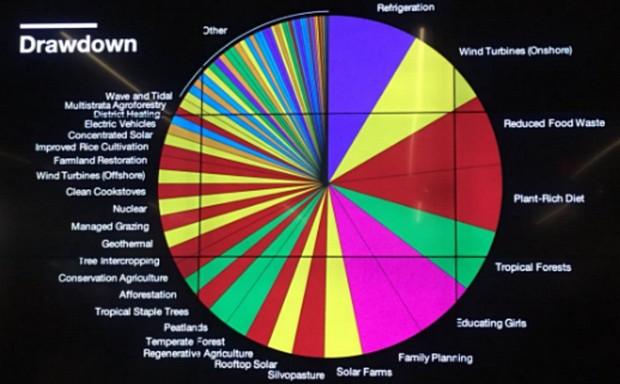 A new book documenting 80 climate-change mitigation approaches ranks refrigerant management as the No. 1 global solution in terms of estimated atmospheric CO2-equivalent reductions between 2020 and 2050.

The book, “Drawdown: The Most Comprehensive Plan Ever Proposed to Reverse Global Warming,” edited by Paul Hawken, calculates that refrigerant management – one of seven solutions in the “materials” category” – would eliminate emissions equivalent to 89.70 gigatons of carbon dioxide (compared to business-as-usual) at a cost of $902.8 billion under a “plausible scenario” pursued over the 30-year period.

In the chapter on refrigerant management, the impact analysis is described as including “emissions reductions that will be achieved through the 2016 Kigali [Montreal Protocol} accord, as well as additional practices to manage refrigerants already in circulation.” Over 30 years, “87 percent of refrigerants that may be released can be contained.”

The chapter also cites the market availability of natural refrigerants as substitutes for HFCs, noting the need for “addressing the refrigerants coming out of use, as well as transitioning those going in.”

If all 80 current approaches were used under the plausible scenario, the total impact would be a reduction of 1,051.01 gigatons of CO2-equivalent, at a net cost of $27,405.68 billion, and a net savings of $73,874.52 billion. Refrigerant management represents 8.5% of the total emissions reduction.

The book is based on “Project Drawdown,” a research project headed by Hawken that includes more than 250 researchers and scientists from 22 countries. Its aim: to create a list of the most effective existing solutions for arresting and reversing global warming, the impact they could have if scaled, and their cost.

The research tracks “a blueprint that already exists in the world in the form of humanity’s collective wisdom, made manifest in applied, hands-on practices and technologies that are commonly available, economically viable and scientifically valid,” writes Hawken, project director, in the book.

The project defines drawdown as “the point in time at which greenhouse gases peak and begin to decline on a year-to-year basis.” The project’s ultimate goal, the book stresses, is not just to slow the pace of global warming but to reverse it. Drawdown would not be achieved under the plausible scenario, but is possible under the drawdown scenario and more likely under the optimum scenario, the book says.

More Information on the book and Project Drawdown is available at www.drawdown.org. Online technical summaries for each solution will be available May 1, 2017.