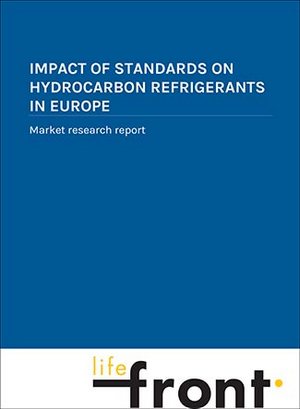 While the F-gas phase down seeks a reduction in HFCs of over two-thirds by 2030, current standards are still seen as a barrier to the take up of low GWP hydrocarbons.

A new report from the Shecco-led Life Front project claims that while efforts to review the current flammable refrigerant charge size limits are underway, the process is lengthy and the timelines for review are unclear in most cases.

It also maintains that the development of requirements is generally much more advanced for A2L refrigerants than for the A3 hydrocarbons.

The Life Front project commenced last year with €1m of EU funding. It aims to remove “barriers posed by standards” for flammable refrigerants and improve system design to address flammability risks. This will include setting up a standards action group and best practice manuals for EU equipment manufacturers using flammable refrigerants. The project, with a total budget of €1.75m, runs until June 2020.

As expected, the report researchers found safety concerns and current limitations on charge sizes as the most important barriers to wider uptake of hydrocarbon refrigerants. A large number of companies admitted that higher charges would facilitate an expansion of their market. Others maintain that they are not yet in the market because their products would require higher charges than the ones currently allowed.

The report argues that while the discussions are underway on several issues concerning A3 refrigerants within group standards EN 378 and ISO 5149, there is currently no clear timeline for publication of revised standards.

The on-going revision of product standards IEC 60335-2-89 (commercial refrigeration) and IEC 60335-2-40 (air conditioning and heat pumps) relates to the charge size limitations of A3 refrigerants. In case of IEC 60335-2-40, a proposal to address the charge size of A3 and mitigation measures is said to be currently at committee draft stage and a revised standard is expected sometime between 2019-2022.

The number of hydrocarbon-based display cabinets in supermarkets is estimated to be around 2.5 million globally. There are also said to be more than 200,000 heat pumps and a similar number of portable ACs using hydrocarbons in Europe.

The report can be read and downloaded here.