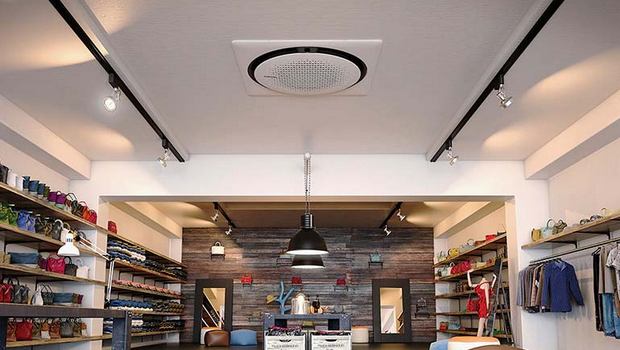 Samsung began this process back in 2018, with the launch of R32 RAC wall mounted systems. This has now been extended to cover the entire split system range, including its Wind-free products.

The new R32 refrigerant models are said to achieve a significantly higher efficiency than those using R410A, with SEERs of up to 7.6 and SCOPs of up to 4.6.

The improved R32 range also operates to -20°C in heating, compared to the current -15°C and pre-charge piping lengths have also been increased, which reduces both installation time and costs.

Availability of equivalent R410A products will continue for a while, but Samsung says it will progressively focus its UK stocking profile on the new, more efficient R32 models.

Perry Jackson, Head of Air Conditioning at Samsung said: “Rather than a gradual conversion of model styles to the new refrigerant, Samsung have developed R32 versions of its entire split system indoor range at launch, including the round 360 cassette, Wind-free cassettes, ducted, wall, ceiling and floor mounted systems.”

In addition to the launch of the R32 range, Samsung will also be releasing a Wind-free version of its slim one-way cassette split system.

“Customers are embracing the numerous benefits of Wind-free technology, both reducing running costs and improving comfort levels. So, following the success of the VRF Wind-free one-way cassette, we welcome the addition of this model to our split system line-up,” said Samsung Climate commercial manager Andrew Faulkner.

However, Samsung has decided not to develop an R32 version of its standard 4-way cassette split systems.