Many reasons for small quantities of refrigerant 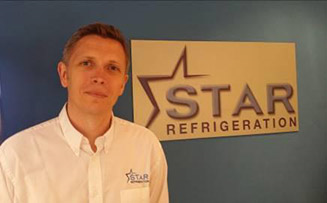 Ammonia is an environmentally benign, cost efficient and future proof refrigerant. It has been traditionally used in industrial applications for cooling capacities of several megawatts using tonnes of refrigerant charge. However, the flammability and toxicity of ammonia impose comparatively high safety requirements in terms of system design when compared to synthetic refrigerants, and it traditionally has not always been suitable for every application.

System and component development has resulted in the wider adoption of low-charge ammonia systems as an attractive alternative to conventional systems, across an increased range of applications. Ammonia is non-harmful to the environment and isn’t included in the F-Gas Regulation and pending phase-down programme. Smaller charges reduce safety risks and the regulatory stipulations that have to be heeded when devising the system. With a combination of low Total Cost of Ownership (TCO) and low operating costs, low charge systems are often the best solution for the long-term, in both economic and ecological terms.

Traditional pump-based ammonia refrigeration systems typically contain a charge of two to three kilograms per kW cooling capacity. By contrast, low-charge systems contain far less ammonia, typically less than 1.3kg per kW, and applications are even possible with just 0.06kg per kW. These small quantities reduce health and safety risks in the event of a leak and simplify the official approval procedures, as systems with smaller charges have to heed far fewer requirements and regulations. The planning, operation and maintenance of some low charge system designs is also easier as there are fewer components, and many systems are manufactured as a single factory built package. In many cases there will be no need for pumps to move the refrigerant around the system and both pipework and vessels are smaller.

Low charge systems can achieve the same capacity levels as conventional pump-based systems but with a fraction of the refrigerant inventory. Traditional refrigeration systems circulate more liquid than is required for extracting heat in the evaporators. The overfeed rate – the ratio of liquid to gaseous ammonia – is typically 2:1 to 8:1 depending on the application. In other words, only one of the two to eight kilograms of refrigerant pumped through the system is actually evaporated into the gas phase. In low charge systems, the ratio is usually less than 1.2:1. Rob Lamb, marketing director at eurammon member, Star Refrigeration, explains: “Suitable system designs can reduce the ammonia charge in the overall system by 75% and even 95% in the evaporator, with no appreciable drop in capacity.”

These low circulation rates are possible through recent developments in evaporator design for temperature controlled storage applications using aluminium piping. Traditional air coolers use stainless or galvanised steel pipe which require 4:1 recirculation rates to achieve the design cooling capacity. Aluminium pipe has twice the thermal conductivity of galvanised steel and 12.6 times the conductivity of stainless steel (304L). The result is improved heat transfer between the room air and the refrigerant without the need for liquid pumps, leading to more efficient operation than pumped recirculation for the same operating conditions.

When designing low charge systems, attention is required in terms of charging and installation cleanliness. Mr Lamb states: “Optimum efficiency and permanently safe operation depends crucially on accurate calculation of the required ammonia charge. It must be large enough to permit stable, efficient operation across the entire operating range of the system, and also take account of changing ambient temperatures and system loads.”

If the charge is too small, it will jeopardise the long-term performance capability and reliability of the overall system. For example, if a leak causes small quantities of refrigerant to escape, this would reduce the cooling capacity and efficiency of the system. Cleanliness during the installation process is also important. Mr Lamb explains: “The small circulation rates required for low charge systems means that small orifice expansion devices can easily clog due to remnants of dirt from the installation process.” On the other hand, the refrigeration systems are simple in design, reducing requirements for ongoing maintenance which makes them cheaper to operate.

Low charge technology with its high system capacity opens up new applications where classic ammonia systems or refrigeration plants with synthetic refrigerants have been used. This includes refrigeration plants for deep-freeze and cold storage facilities, as well as the food industry, process cooling, data centre cooling systems and the HVAC sector.

The new refrigeration system installed for British food and frozen food specialist Farmfoods is a good example of the efficiency and flexibility of low charge systems. The company has around 300 food stores throughout the UK and was looking for an energy efficient refrigeration system with natural refrigerants for its new distribution centre in Bristol, to supply the company’s stores in the south of England. Farmfoods opted for two Azanefreezers by Star Refrigeration, with ammonia as a refrigerant. These operate with a total cooling capacity of 530kW to keep temperatures permanently and reliably at -22°C in the freezer rooms. The chilled areas are cooled to +2°C by an Azanechiller which uses ammonia to cool a secondary glycol circuit and has a capacity of 120kW.

The intelligent system design reduced the ammonia charge in both systems to 0.25kg per kW and 0.1kg per kW respectively. The new systems are not only far more efficient than standard HFC refrigeration systems. Indeed, use of the natural refrigerant ammonia also reduces the company’s carbon footprint, something that final consumers find increasingly important.