R466A passed by ASHRAE with A1 classification 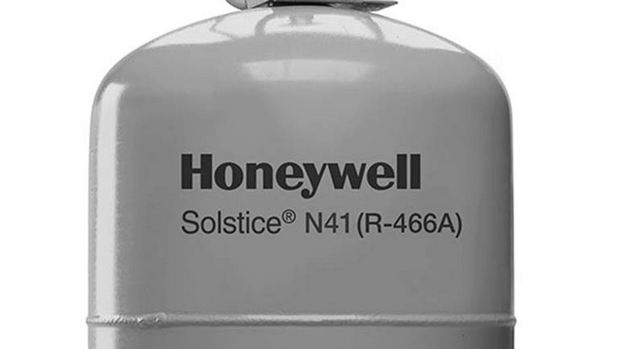 R466A, Honeywell’s non-flammable, non-toxic, lower GWP replacement for R410A has passed ASHRAE approval and is on course for introduction in the second half of this year.

Speaking at a packed meeting of the Hampshire Refrigeration Society in the UK this week, Tunca Sekban, Honeywell’s senior product marketing manager EMEAI, confirmed that the refrigerant has been approved by ASHRAE’s SPCC 34, designation and classification standard committee, with an A1 classification.

Seen as a potential lower GWP, non-flammable alternative for use in VRF, R466A created considerable interest when announced in June.

To be sold by Honeywell as Solstice N41, R466A blends the current R410A constituents R32 and R125 with 39.5% of CF3I, a fire suppressant also known as trifluoroiodomethane.

It is CF3I that gives the refrigerant blend its lower GWP of just 733 and ensures its non-flammability. However, CF3I is not without critics. Previous research has raised stability issues.

Speaking at the Hampshire Refrigeration Society meeting, Tunca Sekban dismissed those concerns. He said that the R466A had been in development for two years and Honeywell had been working with over 15 OEMs – the key compressor companies and component manufacturers. “The stability and shelf life can be addressed by standard measures practised by the industry,” he said.

Interest in R466A meant a packed house for the Hampshire Refrigeration Society meeting at the Waterloo premises of Business Edge. The audience was also updated on refrigerant leak detection and fixed gas monitoring systems by Mark Scott of TQ Environmental, and Rob Thomas of Martindale Electrical presented a tool box talk on safe electrical isolation.

Honeywell’s technology teams in Buffalo, USA, are said to have conducted significant compatibility tests, and consistent test results have been reported by OEMs. “One of the compressors that we have been running on chiller applications and residential air conditioning has exceeded 5000 hours,” said Tunca Sekban.

Sekban said that tests had shown R466A to be a “close match” to R410A in terms of efficiency in both heating and cooling. In high ambients it actually showed a 5% efficiency increase.

Capacity comparisons showed R466A was a 95%-100% match with R410A. In addition to its non-flammability, R466A also lacks the high discharge temperatures exhibited by its main rival R32.

Although CF3i has an ozone depletion potential, this is negligible and therefore R466A faces no restrictions under the Montreal Protocol, Honeywell says.

The main target in the development of R466A has been to replicate the design features of R410A for OEMs. Honeywell maintains that there will be almost no conversion cost for OEMs – as same size components can be used.

“This is the refrigerant that we believe the market needs globally in different applications. I think it would save a lot of equipment manufacturers the redesign costs and investment,” said Tunca Sekban.

Despite its close comparison to R410A, R466A will not provide the “silver bullet” solution of being a retrofit in existing R410A systems. At best, the condensing unit will need to be replaced.

Even at a time of spiralling refrigerant gas prices in Europe, the intricacies of producing R466A means it will not be a cheap solution, but Honeywell is seeking to match the prices of R32.