R404A will be scarce and more expensive 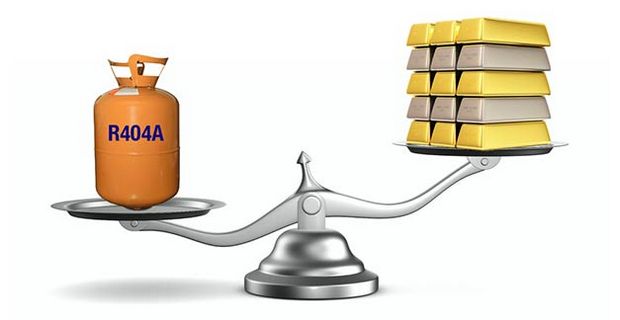 Refrigerant suppliers insist that they are not “crying wolf” with dire warnings about the future availability of high GWP refrigerants like R404A.

Despite seeing the price of R404A double in the last year, refrigerant suppliers have warned that it will shortly be less about whether end users can afford this high GWP refrigerant and more about whether they can actually obtain any.

This was the overriding message at a special presentation organised by Bristol-based refrigerant company IDS Climalife last week.

Climalife MD Alan Harper warned that the F-gas “honeymoon” is over. “Prices will continue to increase this year and their may be limitations on supply,” he said. “Next year it won’t be about pricing it will be about availability.”

Europe is now just months away from the F-gas phase-down “cliff” in 2018 which will see a 37% cut of the baseline. In practical terms this means the European industry will have to make do on a maximum of 115Mt CO2eq – a little over two-thirds of the 168Mt CO2eq consumed in 2015.

Mark Hughes, business development manager at refrigerant producer Chemours, which along with Honeywell has the largest EU quota, said: “We all get cut next year – significantly. We are having to be very careful with our quota month by month. Prices are on the increase and we can see early supply issues.”

Achieving the initial 2018 target is dependent on the industry taking a number of actions. Reducing the amount of leakage is one, but even more urgent is the need to transition away from the higher GWP refrigerants like R404A.

With R404A equipment still being produced, there are fears that similar warnings of refrigerant scarcity and redundant equipment during the R22 phase-out and, before that, the CFC phase-out, have meant that end users are ignoring the concerns.

Industry body EPEE estimated that European supermarkets will have needed to convert or replace 50% of their R404A systems in order to achieve the 2018 reduction. “That’s clearly not happening,” said Climalife technical director Peter Dinnage. “Part of the problem is people putting in R404A in new equipment,” he added.

R404A, with its GWP of 3922, along with all other refrigerants with a GWP above 2500, will be banned in new stationary refrigeration equipment from 2020. Crucially, for those still buying R404A equipment, 2020 also sees the imposition of a service ban being applied to all systems with a charge size of more than 40TCO2e (around 10kg). Refrigerants R507 and R422D will also be impacted by this service ban.

The producers argue that there are a number of alternatives available. While CO2 is being adopted in many new supermarket refrigeration systems, a number of lower GWP alternatives are also available to retrofit existing R404A equipment. These retrofit gases include R448A and R449A which both have GWPs of around 1300.

“Today there is no excuse for putting R404A in,” said Mark Hughes.