Why R-32 May Be the Refrigerant of the Future 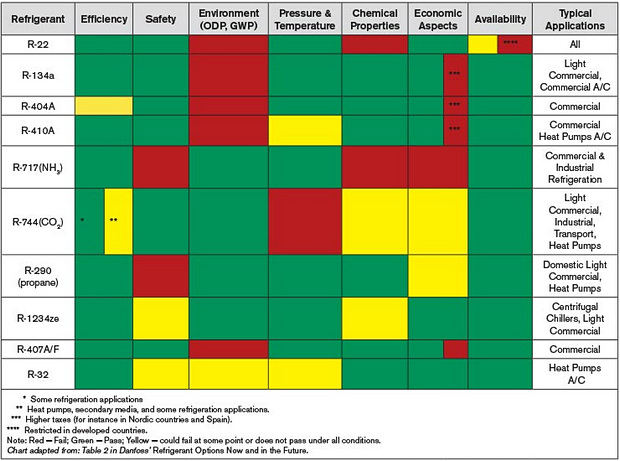 In the late 1980s, those of us of a certain age became familiar with an international agreement called the Montreal Protocol. The goal of this agreement was the phaseout of ozone-depleting chlorofluorocarbon (CFC) refrigerants. Then, in 1999, Title VI of the U.S. Clean Air Act was modified to phase out high global-warming hydrofluorocarbon (HFC) refrigerants. Now, once again, the fix has been deemed inadequate, and we are being asked to jump into a new generation of refrigerants.

In the past, each generation of refrigerants was considered to be the optimum one to use.

From todays’ perspective, what would the ideal/dream refrigerant be? It would be a safe compound (or blend of compounds) with no toxicity or zero flammability risk. It would have no compatibility problems with materials of construction, be inexpensive to produce, and provide a capacity greater than the existing R-22 and R-410A refrigerants. To be absolutely perfect, it would be available as a drop-in refrigerant that operates more efficiently than current refrigerants do in existing systems.

Unfortunately, the odds of a chemical engineering breakthrough that will provide the perfect refrigerant is minuscule. All of the possible next-generation options have pluses and minuses as they seek to satisfy the U.S. Environmental Protection Agency’s (EPA’s) regulatory hurdles. Hence, tradeoffs will need to happen when the looming refrigerant change is made. Table 1, which is adapted from Danfoss’s “Refrigerant Options Now and in the Future,” identifies some existing refrigerants and the leading proposed replacements. The values shown in green on the table meet the goals listed below:

Hydrofluoroolefin (HFO) refrigerants are made up of hydrogen, fluorine, and carbon. This refrigerant class has double-bonded carbon molecules in its structure. There are a number of HFO refrigerants currently under development or going through the approval process. Thus, R-1234, with a set of alphabet letters after the numbers, will be available on the market soon. These refrigerants are listed as marginal for flammability and equipment cost. However, they earn much closer to a passing grade for practical usage. Hence, their viability as replacement options remains. Two that are first out of the approval gate are HFO R-1234yf (2,3,3,3- Tetrafluoropropene) and HFO R-1234ze (Trans-1,3,3,3-Tetrafluoroprop-1-ene). The main concern from a user’s perspective is they will be expensive refrigerants because the compounds are more difficult to produce than HFCs were.

R-32 is an HFC refrigerant that has a GWP of 675 over the 100-year duration period by which refrigerants are rated. For comparison, the GWP for R-22 — a hydrochlorofluorocarbon (HCFC) — is 1,810; for R-410A (an HFC), it is 2,090. R-32 has an ODP of 0. When coupled with its lower GWP, it’s a winner when compared to R-22 and R-410A. With relatively minor retrofitting, R-32 can be manufactured in existing R-22 facilities, and it is cheaper than today’s price for the original R-22. So, why was R-32 not considered before? The answer: It has a flammability rating per ISO Standard 817 and is listed as a 2L refrigerant in ASHRAE Standard 34. However, it has a relatively low burning velocity that is actually slightly lower than ammonia’s burning velocity. Thus, it’s not explosive, like butane or pure hydrogen. A spark will not ignite R-32; it takes an open flame to ignite it. Since flammability is the only negative, and it represents a very small risk, R-32 would appear to be a good option. In fact, R-32 would be the undisputed candidate except for one small detail: 2L refrigerants are currently not allowed to be used in U.S. building codes. Additionally, equipment instructions and industry usage standards need to be updated. It should be noted that R-32 is used in many applications outside of the U.S.

Carbon dioxide (CO2) makes an excellent replacement refrigerant except for one major detail: The operating pressures required are so high that the compressor efficiency suffers tremendously and piping thickness needs to be greatly increased. Additionally, relevant working pressures at 2,000 psi make the systems more dangerous to work on.

Due to the decreasing price of natural gas in the U.S., ammonia- or lithium bromide-based absorption systems may make a comeback. Thus, they remain on the list of possible refrigerants of the future.

Propane fails the flammability safety requirement completely. However, since it passes all of the other requirements, it’s often included on the list of possible replacement refrigerants. It’s currently allowed by the EPA for stand-alone, small charge, retail food refrigerators and freezers. Warning: R-290 has been marketed as a direct drop-in replacement for R-22, but it is illegal to use R-290 in comfort cooling applications.

In conclusion, per this limited perspective, HFO blends appear to be the answer. It looks like the next generation of replacement refrigerants will come from new HFO blends, and — once U.S. codes are updated — R-32. Additionally, ammonia-based absorption systems may have some niche markets where natural gas is cheap and readily available. Contractors and other industry practitioners should regularly monitor which alternative refrigerant producers and equipment manufacturers are planning on releasing.

Best guess is that common sense will prevail, the industry will work to get existing codes to approve the use of R-32, and it will become the refrigerant of choice over the more expensive HFO blends.