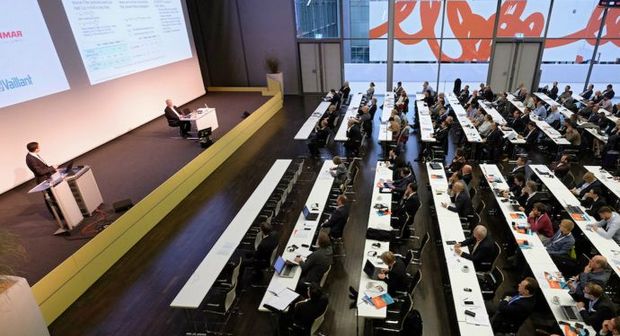 While Japan remains the world leader in using CO2-based heat pumps, hydrocarbons are gaining ground in the European heat pump market, according to a speaker from Emerson at the European Heat Pump Summit, sponsored by Chillventa.

The Summit – a key event for the European heat pump market – took place in Nuremberg, Germany on 24 and 25 October.

“So there, you’ll see a gain by using propane, just thanks to the refrigerant properties, which is quite interesting,” he added. “You need also less charge in the system, less charge meaning less cost.”

Emerson was presenting its propane Copeland Scroll Compressor both fixed-speed and variable-speed during the Summit.

“Already now we are more or less reaching the same efficiency [with propane] as R410A, which has been used for the last ten years,” Wilmot said.

Hydrocarbons – including propane – have a GWP of 3, and are exempted from the HFC quota under the European Union’s F-Gas Regulation.

By 2018 the HFC quota F-Gas Regulation will fall to 56% of the baseline compared to the previous 63%. The anticipated shortage has already led to price hikes for the most commonly used HFCs, such as R404A and R407.

However, Wilmot noted, the lack of knowledge and of training for maintenance in the workforce were two of the main barriers for a wider uptake of propane in heat pumps.

“The technology is still new for most end-users,” he said.

Safety concerns are still slowing down the uptake of propane as well. Yet “the [propane bottle] I have at home for my grill has 13 kg of propane inside,” said Wilmot. “It is huge compared to the 1.5 kg of propane you have in a heat pump.”

However, Pascal Wilmot remains confident in the wider uptake of propane in the heat pump market, thanks to the pressure of the EU F-Gas Regulation.

Besides Emerson, component supplier Nibe and manufacturer Alfa Laval were also present at the Summit to promote propane-based heat pumps.