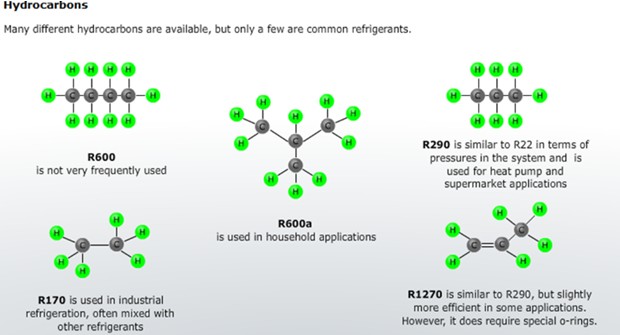 I was going to call this post “Playing With Fire” but didn’t for obvious reasons. Anyways, in my last post we saw how CO2 (R744) can be used in both a traditional sub-critical as well as in trans-critical cycles which operate almost backwards to each other. Also, when I typed in trans-critical without the hyphen, Spell Wreck asked me if I meant to type ‘transatlantic’ instead. Um no, but it did remind me of a little bit of history to touch on before we move onto R290. I apologize for the digression but I think you will find it interesting.

Back in the day, several decades before CFC’s made the scene, CO2 was the big player on the block. Refrigeration was still in it’s infancy and the cold chain that we rely on today just didn’t exist. If we go back 20 years earlier still, refrigeration occurred between December and March when the ice on the lakes was thick enough to harvest and then store for the rest of the year. I kid you not. So even though we may wonder how life existed without a bar fridge in the basement, the advent of early, large scale refrigeration was nothing short of dramatic.

Think about it. Your body does not make vitamin C. Combine this with the fact that the other critical vitamins that we require are only found in fruits and vegetables available for a short period in the year, and it is easy to see why malnutrition was prevalent in the northern hemisphere during winter. When your grandfather tells you he received an orange for Christmas, you can understand why he would have been excited. Read more