Paris Agreement on climate change: US withdraws as Trump calls it 'unfair' 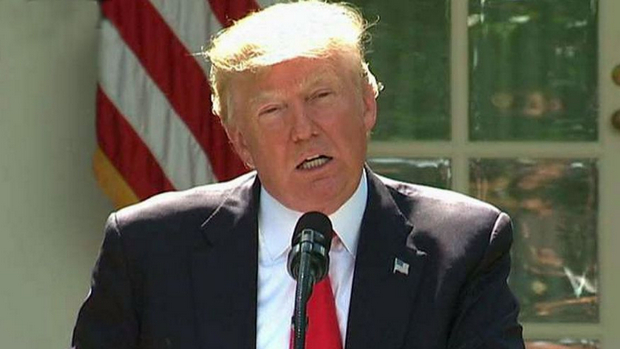 After days of drama and suspense, President Trump announced Thursday that his administration will exit the Paris climate agreement.

„So we’re getting out,“ Trump said. „The Paris accord is very unfair at the highest level to the United States.“

Trump’s decision fulfills a campaign promise and satisfies strong Republican opposition to the global climate deal but also isolates the U.S. and is certain to bring condemnation from world leaders and critics in the scientific community.

Leaving the accord aligns the United States with Syria and Nicaragua.

Critics of the Paris agreement argue it hurts the economy but supporters say it will create jobs down the line.

“The Paris accord will undermine our economy,” Trump said, adding that it “puts us at a permanent disadvantage.”

The Paris Climate Agreement is a pact between nearly 200 nations to voluntarily reduce their greenhouse gas emissions in an effort to fight climate change. The U.S., the world’s second largest emitter of carbon, would be required to reduce fossil fuel emissions nearly 30 percent by 2025.

Former President Barack Obama used his power as president to join the Paris Accord without a vote in the legislature. Similarly, Trump used his authority to call it quits.

The former president weighed in on Thursday’s news.

“Even in the absence of American leadership; even as this Administration joins a small handful of nations that reject the future, I’m confident that our states, cities, and businesses will step up and do even more to lead the way, and help protect for future generations the one planet we’ve got,” Obama said in a statement.

Vermont Sen. Bernie Sanders called Trump’s decision “an abdication of American leadership and an international disgrace” while former Vice President Al Gore said it was “a reckless and indefensible action.”

“The president is sending a clear message that we will no longer remain beholden to burdensome international deals at the expense of our taxpayers,” she said. “I commend the president for making this decision that will save the U.S. economy from the loss of millions of jobs and trillions in economic output.”

Trump hyped-up his announcement Wednesday on Twitter – prompting American allies around the world to weigh in on the consequences of the U.S. withdrawing from the global pact.

At a speech in Berlin, Chinese Premier Li Keqiang said that fighting climate change is a „global consensus“ and an „international responsibility.“

Though there are no legal ramifications for pulling out of the accord, it does alienate America and diminish its standing as a global leader.

Miguel Canete, the European Union’s top climate change official, said the decision to pull out of the Paris accord makes it „a sad day for the global community.“

He also predicted that the EU would seek new alliances from the world’s largest economies to the most vulnerable island states, as well as U.S. businesses and individuals supportive of the accord.

“We are on the right side of history,” he said.

Trump, who announced his decision from the White House Rose Garden, campaigned against the climate agreement during the 2016 election season.

As a candidate, Trump vowed to “cancel” the Paris climate deal during his first major policy speech on energy in March 2016. In that same speech, he slammed “draconian climate rules” and vowed to cut any funding for United Nations programs related to combatting climate change. In the past, Trump has refused to acknowledge that humans contribute to climate change and has dismissed it as a hoax.

Though the Paris Climate Agreement is not legally binding, the decision to either stay or withdraw has been deeply polarizing not only with lawmakers but also members of Trump’s inner circle.

Trump’s chief strategist Steve Bannon as well as EPA Administrator Scott Pruitt had been pressing the president to exit the deal. Both sat in the front row during Thursday’s announcement and applauded.

Trump’s daughter Ivanka as well as business leaders and other U.S. allies have been pushing pro-Paris agenda for weeks. Business leaders including Apple’s Tim Cook and Tesla’s Elon Musk were among those who lobbied Trump to stay in the agreement.