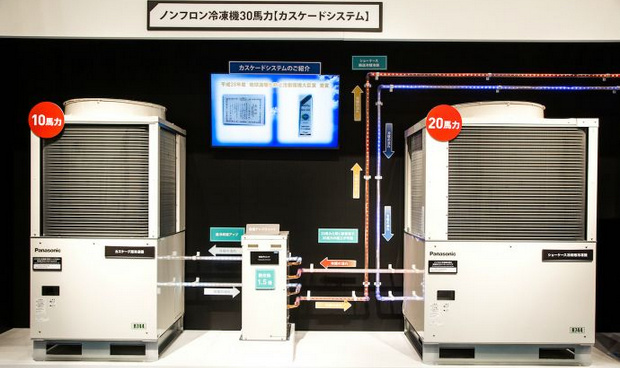 Panasonic is debuting its new 30-HP CO2 cascade system at the 2017 Supermarket Tradeshow in Tokyo.

Until recently, Panasonic’s maximum capacity offering for CO2 systems was 20 HP, which is insufficient for most large supermarkets. Additionally, Japan’s High Pressure Gas Safety Act limits the size of the CO2 system that can be used.

As a result, supermarkets have lagged far behind smaller convenience stores, which have experienced a huge increase in adoption of CO2 systems in the past couple of years.

Linking the two condensing units in this way effectively increases the refrigeration capacity of the gas coming from the 20-HP unit to reach 30-HP.

Increasing the refrigeration capacity of the gas itself means none of the existing piping in the store needs to be changed. The same 20-HP piping can be used, minimising installation costs and improving operational reliability.

Development costs were also minimal since the system uses Panasonic’s 10-HP and 20-HP units, which are already being mass-produced – passing on further cost savings to customers.

Tachibana says he is encouraged by the growth in demand for CO2 systems from large supermarkets in Japan – demand he has seen grow steadily since the Kigali agreement to phase down HFCs last year.

However he is worried that the discontinuation of Japan’s Ministry of Environment (MOE) subsidy for natural refrigerant systems could have a negative effect.

Tachibana says Panasonic – alongside several retailers – will continue to lobby the MOE to reinstate the subsidy for the retail sector.

Panasonic has a lot of standing orders for CO2 systems from retailers waiting for the subsidy to come back into effect. “I should just drop the stack of orders on the MOE’s desk and say, ‘Here, look at this! Look how many customers are demanding CO2!” Tachibana says with a grin.