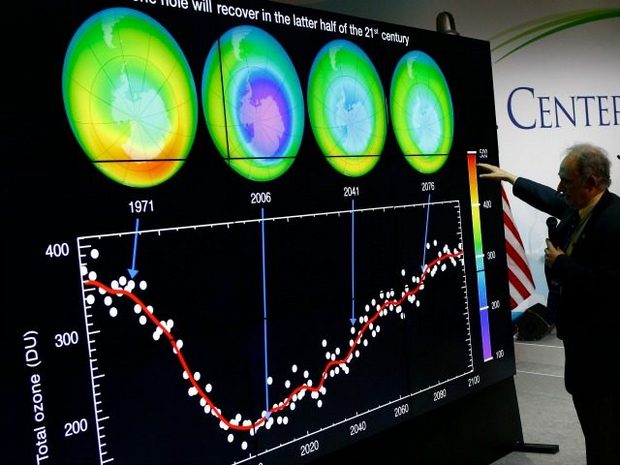 In the period from 2000-2015, the hole in the ozone layer shrank by more than 4 million square kilometers—nearly a billion acres—according to a new report in the journal Science.

During the 1980s and into the 1990s, news of a massive hole in the ozone layer caused worldwide panic, stoked by everything from rumors of sheep being blinded by increased atmospheric radiation to the fear of a skin cancer pandemic and even comparisons to “AIDS from the sky.”

Now scientists at MIT along with others have found that since 2000 the ozone hole has actually shrunk by an area half the size of the contiguous United States, although the process is also heavily affected by variables such as volcanic eruptions from year to year.

Bryan Johnson, a research chemist at the National Oceanic and Atmospheric Administration, has noted attention shifting over the years from one environmental concern to another.

“There are three phases to atmospheric concerns,” Johnson says. “First there was acid rain. Then it was the ozone hole. Now it’s greenhouse gases like CO2.”

In reaction to fears over the ozone hole, most of the nations in the world agreed to the Montreal Protocol in 1987, which banned the use of chlorofluorocarbons (CFCs), which had been tied to the creation of the ozone hole.

The lead author of the recent study on the ozone layer believes that the reversal of the hole’s expansion is in large part a result of the Protocol.

“We can now be confident that the things we’ve done have put the planet on a path to heal,” said Susan Solomon, Professor of Atmospheric Chemistry and Climate Science at MIT. “We got rid of them, and now we’re seeing the planet respond.”

Just three years ago, scientists were predicting that the ozone hole would start shrinking “in about a decade,” but it turned out that the hole had already gotten considerably smaller than they realized.

In 2015, the ozone hole reached a record size, but Solomon and her colleagues discovered that the spike in ozone depletion was due primarily to the eruption of the Chilean volcano Calbuco.