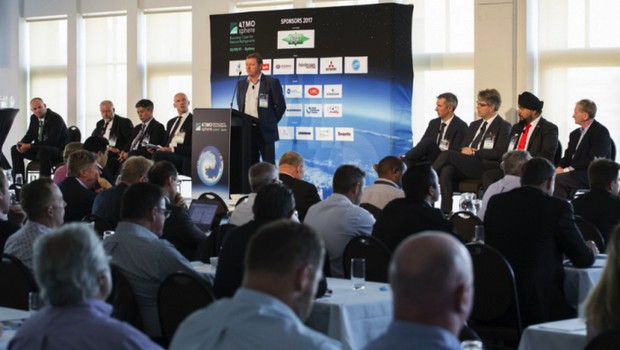 Signalling an increasingly broad set of applications for CO2 around the world, participants in the market trends session at the Luna Park venue discussed CO2 in industrial food processing, cold stores, heat pumps, and chillers.

“There is a revolution underway in industrial refrigeration. We are seeing transcritical CO2 being used more and more in the industrial sector around the world,” said Dusek.

“By now, there is an estimated 100+ systems based on NH3/CO2 in China and it is a clear trend that is supported by the Chinese government.”

“This 3.36 MW plant with 45 compressors demonstrates the scalability of transcritical CO2 technology.”

Inderpal Saund, food retail business development manager at Danfoss, was enthusiastic about the number of their ejectors for use in transcritical CO2 systems currently in use worldwide: „We’ve got over 160 ejectors running globally. I think that’s pretty impressive.”

Trent Miller, hot water heat pump sales executive at Mitsubishi Heavy Industries, provided examples of the Q-ton’s installation in different locations around the world including in warm climates such as Spain.

“Just to prove that CO2 is able to heat hot water in locations close to the equator, we have two [Q-ton] units picking up the load for a 200-room hotel in Spain.”

Regarding the challenges still faced by the industry in Australia, the presenters agreed that proper training and awareness are still lacking but are starting to show signs of improvement.

Brian Rees, group technical manager at Hussmann Oceania, identified training as one of the most important factors for continued CO2 uptake and noted that natural refrigerant systems offer an exciting opportunity for technicians to revitalise their skillsets.

“Training was the thing we did a lot of in the beginning. We still do, but what we’re finding now is that the training is more one on one mentoring and with the equipment itself on-site,” said Rees.

“We also see that some of the technicians who have been in the industry for a long time are getting excited again by working on [systems] that are reliable, well-built, and makes them proud.”