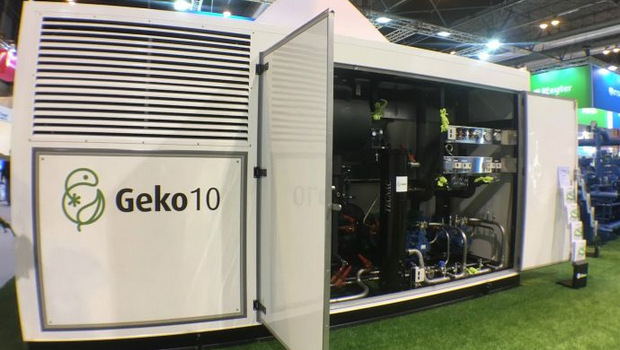 New products for CO2, ammonia and propane refrigeration systems are being launched at leading tradeshow ‘Climatización & Refrigeración 2017’ in Spanish capital Madrid this week.

“The growth of CO2 is fairly recent. With innovations such as ejectors, we saw the potential to be competitive with CO2 in Spain,” Alfonso Antoñanzas, managing director of Exkal, said.

Exkal, a leading manufacturer of refrigeration cabinets in Spain, launched a whole new range of cabinets for CO2 transcritical systems at the tradeshow.

The company is cooperating with system and component suppliers Advansor, Sanden, Danfoss and CAREL at the tradeshow, all of which are presenting their latest innovations at a series of conferences taking place at Exkal’s booth.

The market for transcritical CO2 systems in Spain is evolving fast. Originally dominated by Carrier, new names such as Lennox and Pecomark have now entered the scene.

Spanish manufacturer TEWIS is presenting a new CO2 transcritical rack, while parent company Zanotti – part of the Daikin group – is exhibiting its range of CO2 solutions, propane chillers, and an innovative cascade system that uses propane (R290) and CO2.

A new condensing unit from Japanese manufacturer Panasonic with a small capacity of 2 HP was officially launched on the European market at the show on 28 February.

Panasonic has previously dominated the Japanese market for CO2 condensing units and is now seeking to do the same in Europe, especially as the trend towards small capacity convenience stores continues.

Portuguese company Centauro, a supplier of CO2 gas coolers for the European market, is hoping to compete with a new CO2 condensing unit designed for small store formats. SCM Frigo also exhibited its offering for small stores, the CUBO2 unit for small and medium capacities, at the booth of parent company Beijer Ref.

Climatización also saw the debut of an innovative low-charge ammonia system with a maximum refrigerant charge limit of just 10kg, which can be used in a cascade system with CO2.

Developed by Spanish company Grupo Disco, the system is designed to provide a ready-made solution suitable for high ambient temperatures.

Several propane chillers were also on display at the tradeshow, as well as hydrocarbon-based cabinets.