In India, more than 95% of all cold storages are based on ammonia.

The current annual sales of RAC equipment in India are estimated to be 18.2 million tons of refrigeration. Sales in 2015 exhibit a similar pattern to the existing stock, with stationary air conditioning (44 percent), mobile air-conditioning (20 percent) and domestic refrigeration (13 percent) accounting for almost 80 percent of India’s added annual cooling capacity in 2015.

In 2015 HCFCs and HFCs account for 90 percent of the total sales in the RAC sector in India, with about 10 percent accounted for by natural refrigerants. In 2015, 44.26 per cent of RAC sales was based on HCFCs and 47.29 per cent was based on HFCs. The use of HCFCs has gone down in most sectors in the recent past. Most of HCFC is used in residential air conditioning (60 percent) and commercial refrigeration (25 percent). The reduction in HCFC use has been accompanied by an increase in the use of HFCs.

The highest HFC use is in the MAC sector (40 percent), followed by domestic (19 percent) and commercial (18 percent) refrigeration. 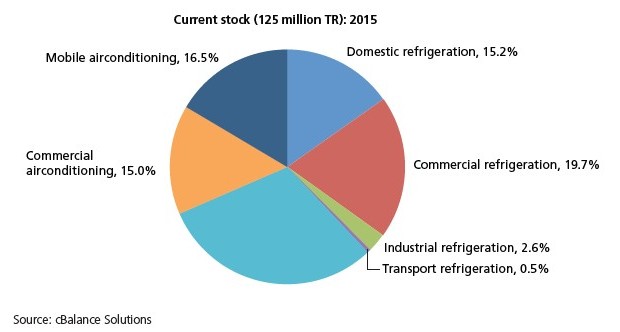 Sales projections till 2030:
India’s total installed cooling capacity is slated to rise about 5 times to 610 million tons of refrigeration by 2030.