NatRef systems on the rise in Southeast Asia 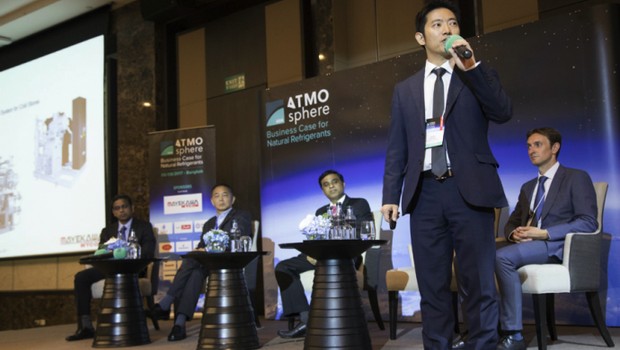 Mayekawa and Panasonic were among the companies reporting impressive growth in NatRef systems at ATMOsphere Asia 2017.

Mayekawa and Panasonic were among the system and component suppliers revealing impressive growth figures for natural refrigerant systems in Southeast Asia during the ATMOsphere Asia 2017 conference, held in Bangkok, Thailand on 6 September.

Japanese system supplier and heat pump and compressor manufacturer Mayekawa announced plans for a new installation using four of its NH3/CO2 systems at a distribution center in Myanmar, scheduled for completion in 2018.

Kousuke Yamamoto of Mayekawa stated that a major driver of the project was to reduce indirect costs for the customer as far as possible.

The use of Mayekawa’s NH3/CO2 system allowed the customer to remove the need for any staff or engineering personnel to be present in the machine room.

Yamamoto also highlighted the growth in the number of Mayekawa NH3/CO2 installations the company has seen recently in other parts of Southeast Asia.

“This technology is now increasing in this region,” said Yamamoto.

Hidekazu Tachibana from Panasonic expressed the company’s strong belief in the potential for CO2 condensing units in Southeast Asia.

“There are many types of CO2 systems, but we believe the future is the decentralised condensing unit,” said Tachibana.

“We’re looking for a customer in Thailand for our CO2 transcritical condensing units,” Tachibana continued.

“Based on our positive experiences in Malaysia and Indonesia, we’re confident the technology should perform well also in Thailand.”

Jason Pok, regional sales manager for Liebherr, discussed the current rate of market adoption for hydrocarbon systems in the region.

“In the last three years, we have sold 200,000 hydrocarbon freezer units in the Asia-Pacific region,” said Pok.

JMM Likido CEO Stuart Cox talked about the effectiveness of CO2 heat pumps for the Southeast Asian market and the return on investment achieved by the company’s customers in the region.

“Payback of our CO2 heat pump system in Malaysia is under two years,” said Cox. “In Singapore, it’s about six months.”

JMM Likido’s heat pump technology was developed locally in Malaysia, and is aiming to deliver considerable energy savings to customers looking to replace their natural gas boilers, especially in the hotel industry.