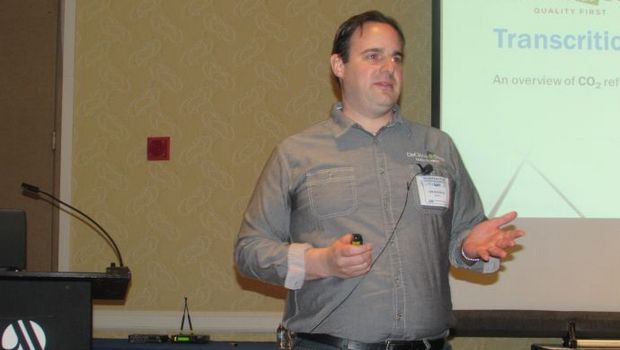 DeCicco’s & Sons, a seven-store food retailer based in Pelham, N.Y., saved $74,000 in energy consumption and power demand over a 12-month period as a result of using a transcritical CO2 booster refrigeration rather than a traditional HFC system.

DeCicco’s compared its store in Larchmont, N.Y., which has operated a transcritical system from Hillphoenix for 15 months, with another of its stores in Ardsley, N.Y., which has a conventional R404A system. Both stores were similar in size and refrigeration load (1 million BTUs medium temperature, 200,000 BTUs low temperature); they also employed the same equipment, such as LED lights, anti-sweat heaters and variable-frequency drives, except for the refrigeration system. (The Larchmont store also has solar panels, which were not included in the comparison.)

“Even in months when I expected the CO2 system to be higher [in energy consumption] like June-September, it never really was,” said John DeCicco, Jr., president of the company, in a presentation last week at the AAA Refrigeration/Hillphoenix 8th annual Symposium in Tarrytown, N.Y. He attributed that to the system’s Trillium adiabatic condenser, from Baltimore Aircoil, which keep the temperature of CO2 gas from exceeding 88°F, CO2’s critical point.

“During the winter months, there was a really big savings,” he added. The reduction in energy consumption alone was about 292,000 kWh over the 12 months, a savings of $55,000. The power demand reduction over that period was 720 kW, or 60 kW/month.In addition to the savings in energy consumption and demand, the transcritical system offers 1.1 million BTUs in recovered heat, used throughout the store.

In promoting the transcritical system, DeCicco describes it as using a “natural refrigerant” rather than CO2, because of the latter’s link to global warming (though CO2 as a refrigerant is vastly better for the climate than HFCs). “Try to say natural refrigerant; it helps tremendously,” he advised the audience.