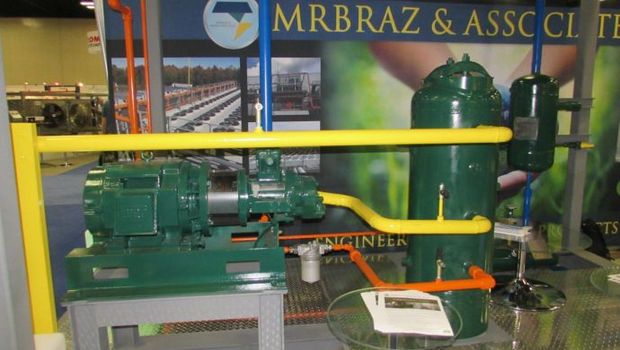 The low-charge units, using only 1 lb./TR of NH3, provide air conditioning at about 10 warehouses.

MRBRAZ & ASSOCIATES, an engineering design firm based in Azle, Texas, has designed and installed low-charge DX ammonia chillers that provide air conditioning in office space at about 10 warehouse locations run by a major U.S. retailer, including four in the past year.

“We have installed critically charged chillers for [the retailer] for six years,” said Claude Wilkinson, director of engineering for MRBRAZ, during an interview at the IIAR Natural Refrigeration Conference & Heavy Equipment Expo, held February 26-March 1 in San Antonio, Texas. He said the retailer – which he declined to name for publication without its approval – was one of the first in the U.S. to install a low-charge ammonia chiller.

The rooftop chiller is designed with only 1 lb./TR of ammonia, which is confined to the unit; it pumps chilled water to an air handling unit, which delivers cool air to the office space. The typical chiller contains about 100 lbs. of ammonia and employs a VFD screw compressor and ECM motors.

“The chiller is not only more energy efficient than an R404A unit but more maintenance-friendly,” said Wilkinson.