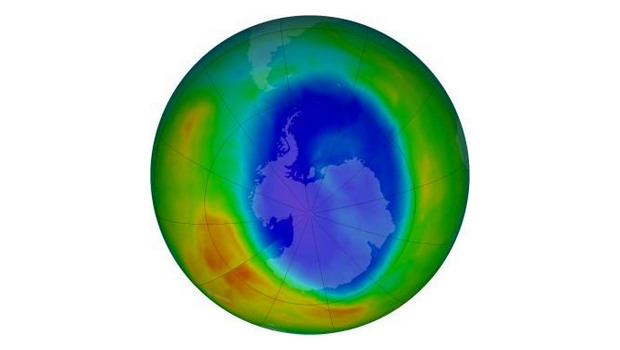 The world returns to Montreal this week to celebrate the 30th anniversary of the 1987 Montreal Protocol, the treaty that saved the ozone layer.

The ozone hole over Antarctica is beginning to close, and a massive global epidemic of skin cancer was averted, thanks to phasing out chlorofluorocarbons (CFCs) and dozens of other ozone-destroying chemicals.

Every nation on earth belongs to this treaty, and together they have eliminated nearly 99 percent of emissions of ozone-depleting chemicals.

On top of that, the Montreal Protocol delivered the world a huge bonus benefit of climate protection, because CFCs and most of the other ozone-depleters did double damage as ultra-powerful heat-trapping greenhouse gases.

In addition to celebrating these achievements, the Montreal treaty parties can also hail another step forward: Last week the 20th country ratified the amendment to phase down another set of super climate pollutants — hydrofluorocarbons (HFCs) — agreed to last year in Kigali, Rwanda. That means the HFC phase-down will start on schedule at the beginning of 2019.

Phasing down HFCs will avoid as much as a half-degree Centigrade of further warming. If we don’t do that, meeting the Paris target of holding warming below 1.5 to 2.0 °C becomes unimaginably more difficult.

In the United States, the Montreal Protocol has long enjoyed the bipartisan support that has eluded other treaty efforts. It is often seen as Ronald Reagan’s crowning environmental achievement, and it has had the backing of subsequent presidents from both parties. While forcefully rejecting the Paris climate agreement, President Trump has been silent on the Montreal Protocol, and all eyes and ears will be trained on the U.S. delegation this week.

So, beyond the well-deserved party, what will the diplomats and dignitaries do this week in Montreal?

First, their principal task is to agree on a funding package for the next three years of work under the Multilateral Fund, the vehicle through which developed countries assist developing ones to meet their phase-out commitments.

Over the past three decades, the Multilateral Fund has distributed about $3 billion to help achieve huge global benefits — an amazing bargain.

Money for the next three-year period will help developing countries implement the accelerated phase-out of ozone-depleting chemicals called hydrochlorofluorocarbons (HCFCs) agreed in 2007. A small portion of the funds, about 5 percent, will be spent on preparation and pilot projects to phase down HFCs.

In May, the Protocol’s economic advisors recommended three-year funding of $603-749 million. This would include money for converting HCFC chemical producers and product manufacturers to ozone-safe chemicals, support activities, preliminary HFC projects, and destruction of HFC-23 (a super-potent byproduct of HCFC-22 production).

In October, in response to funder country feedback, the advisors reduced their projections to $515-560 million. A large part of the cutback stems from funders’ requests to support only the minimum number of projects needed to reach national compliance with the Protocol in 2020, not more. In the earlier figures, significant ahead-of-schedule work was provided for.

The last several replenishments averaged just over $400 million per three-year period, so funding within the proposed ranges would mark an uptick to keep pace with a growing compliance obligations.

But experience under the Protocol shows that the parties often complete their transitions from old chemicals to new technologies ahead of schedule.

So NRDC urges the parties to dig a little deeper into their pockets. The opportunity to go faster on HCFCs and HFCs should not be passed up. Supporting fast action offers major benefits for ozone and climate protection. It also reduces the long run costs for the Multilateral Fund, since it’s cheaper to transition before soon-to-be-obsolete industries grow than after.

Countries will also continue discussing ways to enhance the energy efficiency of air conditioners and other appliances that use refrigerants as a part of the HFC phase-down. Demand for air conditioning is growing rapidly as developing county economies rise. That puts a premium on appliance efficiency to moderate electricity supply needs.

Many countries are signaling support for integrating energy efficiency improvements into the conversion to safer chemicals in cooling products. Countries may decide to hold a full-day workshop next year on the topic to learn more.

Last week, the Multilateral Fund approved its first HFC phase-down project—to convert a refrigerator factory in Bangladesh from HFC-134a to a climate-friendlier hydrocarbon, R-600a. The project will prevent the equivalent of 282,000 tons of CO2 per year. The committee also approved preparation funds for eight additional HFC projects to be considered next year.

Negotiators also made headway on “cost guidelines” for the HFC phasedown, to be used when funding enterprises in developing countries that switch away from HFCs. A key point is energy efficiency: the cost guidelines could allow the Fund to pay extra to support adoption of more energy-efficient air conditioner designs and components, for example. The guidelines could also encourage co-financing with other funding institutions wishing to support energy efficiency as an add-on to HCFC and HFC transition projects. Cooperation with other institutions, such as the Global Environment Facility and the Green Climate Fund, will be an important consideration in the coming years.

Much remains to be done. The Fund’s executive committee needs to keep at it to complete the task of adopting energy efficiency guidelines by next year’s deadline. If the parties agree on a strong replenishment this week, they will help kick the Kigali amendment off to a fast start.

The United States can do the world — and its own diplomatic standing — a big favor this week. It will be a good week for America if our diplomats come to Montreal to celebrate the achievements of the last 30 years, contribute generously to the Fund, and announce plans to stay the course on Kigali.