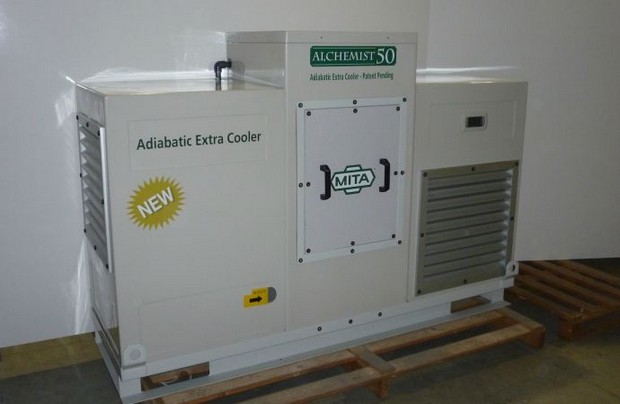 The Italian manufacturer’s new cooler is designed to improve the efficiency of CO2 refrigeration systems.

Italian manufacturer Mita will launch the ‘Alchemist’ cooler in early 2017. The adiabatic extra cooler is designed to improve the efficiency of the CO2 refrigeration cycle by combining two physical principles: the sub-cooling of the refrigerant and the adiabatic cooling of the air.

“Its position in the system is at the gas cooler outlet, with minimal impact on the whole plant,” Tommaso Fontana told, sales manager at Mita

The Alchemist works by employing a fan system to draw ambient air through the adiabatic area. In the adiabatic section, the air temperature decreases thanks to the adiabatic cooling effect.

The cooled airflow is conveyed to the fins of the finned tube heat exchanger while the CO2 flows from the gas cooler outlet into the tubes. “In this way, the CO2 temperature decreases further – additionally to the gas cooler’s cooling,” Fontana explained.

The additional cooling of the CO2 by the Alchemist increases the cooling effect. By increasing the coefficient of performance (COP) of a refrigeration system in this way, the Alchemist reduces the system’s overall energy consumption.

“The addition of the Alchemist to the refrigeration system, adopting the principle of adiabatic cooling, also implies minimum water consumption,” Fontana said.

Mita is currently testing the system in a variety of locations with a view to putting it on the market in early 2017.

The field test results are promising. Across northern Europe, adding the Alchemist to a refrigeration system has delivered seasonal COP increases of 9.5% in Paris, 9.1% in London and 10.1% in Nuremburg. In southern Europe, it has recorded COP improvements of 13.5% (Madrid and Athens), 10.5% (Milan) and 9.9% (Rome).

Mita reports “impressive interest” in natural refrigerants for commercial refrigeration, and particularly in CO2, in the context of the f-gas phase-down pathways put in place by the EU’s F-Gas Regulation and worldwide via Kigali Amendment to the Montreal Protocol.

“The technologies connected with this refrigerant are becoming more reliable,” argued Fontana.