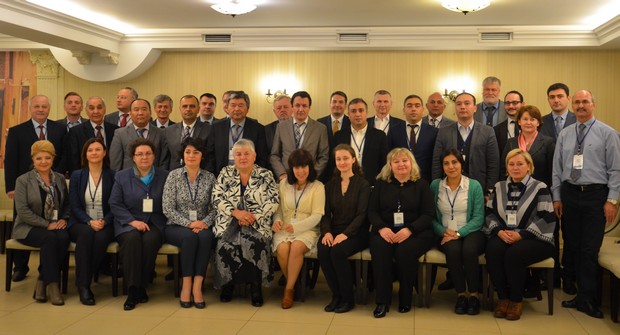 Chisinau, Republic of Moldova, 10 November 2016 – Heads of national refrigeration assocations and Montreal Protocol focal points from 11 Central Asian and Caucasus countries enhance ozone layer protection and sustainable management of climate gases: The experts shared highlights, challenges and lessons learnt from the implementation of their respective hydrochlorofluoro carbon (HCFC) phase-out strategies and from the surveys on ozone-friendly alternatives during the thematic meeting in Chisinau, Republic of Moldova, 8-10 November 2016.

Ms. Inga Podoroghin, State Secretary of the Ministry of Environment, opened the meeting and reiterated commitments that the Republic of Moldova has under the Montreal Protocol. She highlighted the importance of the recent adoption of the Kigali Amendment, which is expected to prevent 0.5 degree C raise in temperature by the end of the century. Thus, the Protocol will provide a significant contribution to targets of UNFCCC Paris Agreement, which entered into force on 4 November 2016. Also, she encouraged countries of the ECA region to join global efforts and explore the alternatives replacing hydrofluorocarbons (HFCs).

Ms. Svetlana Bolocan, Montreal Protocol and Vienna Convention Focal Point of the Ministry of Environment, who participated in the negotiations of the Kigali Amendment, emphasized the importance of adequate and enforceable legislation and standards to ensure the sustainable management of ozone-depleting and climate gases.

Mr. Georgi Arzumanyan, Cluster Leader for Energy, Environment and Climate Change of UNDP Moldova, warned that the demonstrated steady growth in consumption and emissions of HFCs — a group of potent climate gases – would jeopardize the international efforts in reducing the impact of climate change not only in the context of the Montreal protocol but also across all climate-related international initiatives. In this line, HFC phase-down is among the priorities. Read more