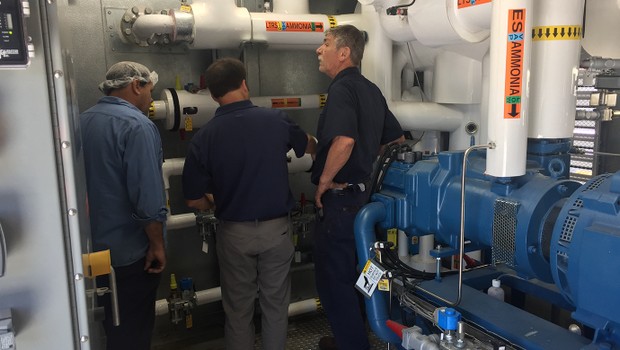 It has been widely acknowledged that the number of technicians trained to handle natural refrigerant systems is dwindling. But the advent of small and standardized low-charge ammonia packaged systems – which can be used instead of traditional massive ammonia plants or synthetic refrigerant systems – will make it easier to train and maintain enough qualified technicians, according to Mike Chapman, director of process safety management (PSM) compliance at Stellar, and Kurt Liebendorfer, vice-president of Evapco.

“There is a deficit of qualified technicians in our industry,” Chapman said. “It is a technician’s market with regard to getting work.”

Chapman and Liebendorfer both argue that low-charge ammonia packaged units (coolers and chillers) are inherently safer than conventional ammonia-based refrigeration systems, which lessens the training requirement.

“Ammonia refrigeration is still, always has been, and always will be ammonia refrigeration – we’re taking the heat out of something and the result is making it cold,” said Chapman. “But the technology by which we’re doing that is what’s changing, improving and becoming more effective and safer.”

The primary driver of the technician shortage is that seasoned technicians are retiring, and their replacements are not showing up in sufficient numbers.

A recent study cited by Chapman determined that there were around 745 qualified technicians for 4,500 jobs in the U.S.

Another consequence of the retirement boom is that the remaining workforce has significantly less on-the-job qualifying experience.

“Nobody’s invincible after a single training course,” Chapman said. “Through the educational process in your career you become qualified to do the job.”

However, Chapman was confident that the evolution of factory-tested systems like low-charge ammonia packages would ultimately make training easier, and more appealing, for new technicians in the field.

“We can get back to where we need to be,” he said. “The old conventional-style systems are much larger, much more complex, have much more ammonia and inherently can be more dangerous and make things more difficult.”

The evolution of packaged units

Low-charge ammonia packaged units continue to make inroads in industrial refrigeration, and even in some commercial applications.

For technicians, the installation process is dramatically streamlined, and for end users there are energy-efficiency and refrigerant savings, as well as decreased regulatory burdens, which contribute to lower total cost of ownership.

“The central machine room goes away,” said Liebendorfer, “because you’ve got these packaged units distributed throughout the building locally serving the cooling loads”.

“They’re typically factory assembled and tested,” he added, “which can facilitate quick installation and start-up versus the field labor it takes to run all that piping”.