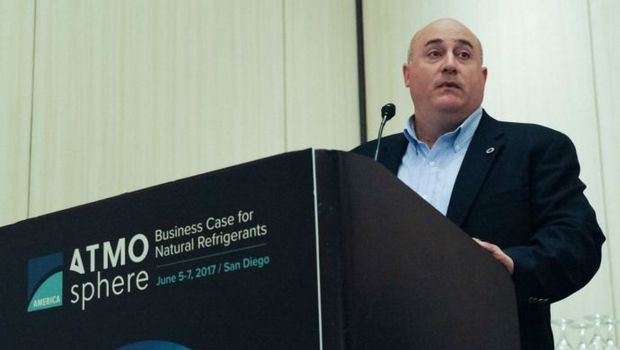 Panelists pointed out safety advantages of low-charge systems for industrial applications on day two of ATMOsphere America in San Diego.

Panelists praised the benefits of low-charge ammonia systems for industrial applications while describing several ways of managing safety and maintenance on day two of ATMOsphere America in San Diego.

“Low-charge refrigeration [ammonia] systems are safer for our employees and the public,” said Lynch.

USCS has commissioned 12 CO2/NH3 cascade refrigeration systems since its first installation in 2006. Over that time, it have been able to reduce ammonia inventory by 27% company-wide.

Lepschat also emphasized the fact that a thorough engineering design will lead to a more efficient system. “Our latest facility design operates with a specific energy consumption of 0.3 kWh/cuft/yr, which is one third of the industry average,” Lepschat said. “An efficient facility will function fine with a smaller charge.”

Panelists were thorough in their analysis of the benefits and drawbacks of low-charge ammonia, compared to other traditional systems, but remained confident in ammonia as the refrigerant for industrial applications.

“Ammonia is not more dangerous than any other refrigerant,” remarked Gerard von Dohlen, CEO of a company operating two public refrigerated warehouses in Newark, N.J.

“We won’t sell something that’s not good for the planet,” said Jackson.