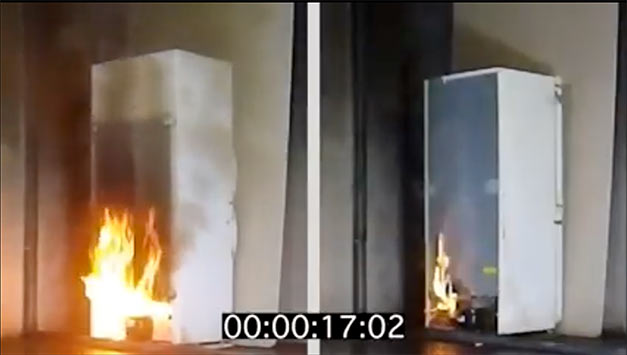 The London Fire Brigade (LFB) has warned that new safety proposals, designed to reduce the risk of potentially deadly fridge and freezer fires, have a “gaping hole” in them.

The busiest brigade in the UK and one of the largest firefighting and rescue organisations in the world, the London Fire Brigade has been pressing for all new refrigeration and freezing appliances to have a fully fire resistant backing as standard.

A report by the brigade in 2013 described them as the “most dangerous household appliance when involved in a fire”. It blamed the “large amounts of plastic and highly flammable insulation” for a large number of rapidly spreading fires.

Since then the LFB has been lobbying for all new refrigeration and freezing appliances to have a fully fire-resistant backing as standard. However, it argues that the current proposals would still allow a large hole at the back of the fridge or freezer which would leave the highly flammable insulation inside exposed.

The doors and side panels of most fridges and freezers are usually covered in metal but many still use a flammable plastic backing, which the LFB says offers very little protection against the foam inside catching alight if a fire starts.

Key UK players in the fridge and freezer industry are due to put their final safety proposals forward to the International Electrotechnical Commission (IEC), the body that sets the global standards for the manufacture of fridges and freezers.

“The deadline for amendments to those proposals is imminent but we fear unless UK manufacturers and other industry bodies ensure the proposals are fit for purpose, a key opportunity to ensure fridges and freezers are made to a higher safety standard will be lost,” the LFB said in a statement.

The LFB reveals that, on average, there is one fire a day involving white goods in the capital and since 2011 there have been eight deaths – including one incident in Neasden where six people tragically lost their lives – and around 120 injuries, as a result of fires originating in refrigeration and freezing appliances.

“Partially covering the back of a fridge is like having a fire door with a hole in it that would allow fire, heat and smoke to pass through,” said assistant commissioner for fire safety Dan Daly.

“The UK fridge and freezer industry has a real chance to influence the international body that sets the manufacturing standards for refrigeration and freezing appliances worldwide but there is literally a huge hole in their latest proposals.

“While most fridges and freezers work safely for years, they are potentially the most dangerous appliance in the home if they are involved in a blaze because they contain so many flammable materials. They are also one of the few electrical items to be always left on when you are sleeping.”

The LFB has written to UK fridge and freezer industry representatives calling on them to urgently review their proposals so they don’t compromise public safety. Currently they still allow for a large area of the highly flammable insulation foam inside to be unprotected from flames.

This is partly to allow for the hoses and wires that power the appliance but the Brigade believes the hole could be covered in a way that would not leave any insulation exposed.