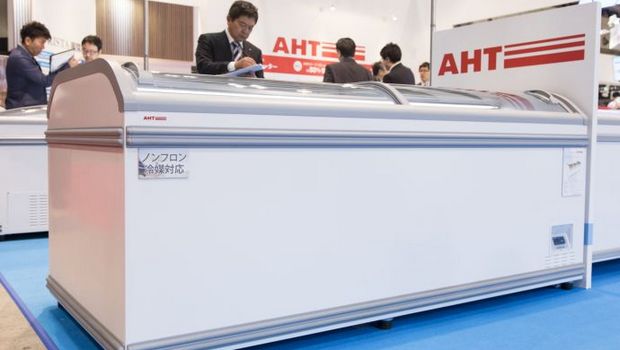 In a sign of growing interest in hydrocarbon plug-in systems in Japan, distributors acknowledged growing awareness of natural refrigerants among end users at this year’s Supermarket Tradeshow, held in Tokyo on 14-16 February.

Japanese distributors of hydrocarbon systems including Panasonic, Rei-tech and Kanoureiki had several R290-based (propane) showcases on display from major European manufacturers such as Liebherr, IARP, AHT and Arneg.

Masahiko Kato of Rei-Tech explained that sales of their hydrocarbon showcases are currently being driven by major Japanese supermarkets, who are increasingly aware of the need to move away from the HFCs being phased down under the Kigali Amendment to the Montreal Protocol.

“Recognition of hydrocarbons among the larger supermarket chains has gradually increased,” said Kato.

“It will be even more interesting, however, if you consider not only major supermarkets but also regional supermarkets. Supermarkets in rural areas are not so conscious of the environment yet. To such supermarkets, we tell them that R290 is energy-efficient, more than that it’s an HFC substitute.”

Yoshiaki Hirayama, sales director for Kanoureiki, also explained that many of the large supermarket chains are becoming more aware of the coming f-gas regulations in Japan and the importance of moving away from HFCs.

However he revealed that, “attention to energy cost reduction is very high” among the majority of the end users he spoke with at the show.

“Users are very concerned about running costs,” he said.

“Because many end users still have little understanding of hydrocarbons, I always consider introducing the benefits of our HFC-free units from the perspective of energy efficiency.”

Mitsuaki Akuzawa, general manager for Panasonic, spoke about the company’s intention to increase its natural refrigerant lineup of plug-in systems to include more hydrocarbons.

“In 2018, we want to release light commercial showcases that use isobutane rather than HFCs to give end users more variety when choosing natural refrigeration technology,” he said.

Hidekazu Tachibana, general manager for Panasonic, added that this growth in awareness can also be attributed to Japanese newspapers publishing articles about the Kigali Amendment.

“However, it is not enough,” he said.

“For normal consumers, the issue of Kigali is still very far away. We have to put more effort into spreading this awareness.”