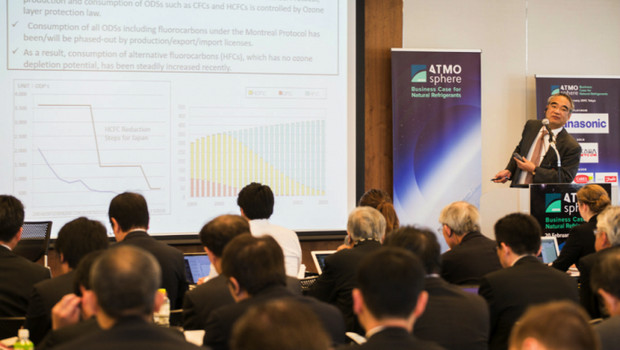 Officials from Japan’s Ministry of Economy, Trade and Industry and Ministry of Environment attending ATMOsphere Japan 2017 were confident that the country would achieve its f-gas phase-down targets.

As the global HFC phase-down gathers pace, participants in the first-ever ATMOsphere Japan conference – held on Monday at the Shin-Marunouchi Building Conference Square in Tokyo – heard how the f-gas phase-down is creating new opportunities for natural refrigerants in Japan.

Representatives of Japan’s Ministry of Economy, Trade and Industry – and the Ministry of Environment – argued that the Kigali Amendment to the Montreal Protocol on phasing down HFCs would have a positive impact on the adoption of natural refrigerants by Japanese businesses.

Atsuhiro Meno, director of the Fluoride Gases Management Office at the Ministry of Economy, Trade and Industry, remarked: “We feel comfortable that [Japan] will be able to achieve the HFC phase-down targets set by Kigali. However, we still feel that f-gas reduction and control measures must be even tougher.”

“We feel that Japan has an opportunity to take the initiative in terms of technological development. We, as a government, would like to support that effort,” Meno said.

Meno highlighted the impressive progress made already – with close to a 10% decrease in overall consumption of HFCs (47.73 million tonnes CO2e) achieved in the past twelve months.

Meno said: “We feel confident that [Japan] is already on track to achieve the new HFC phase-down targets [set by Kigali]. However, going forward, we still feel reduction and control measures can be even tougher.”

New HFC production and consumption control measures, such as a quota system, may eventually be needed, hinted the government official.

“Though we are not limited to promoting specific refrigerants, if we see progress being made in certain areas then we are willing to support that effort,” Meno explained.

Yasuhiro Baba, director of the Office of Fluorocarbons Control Policy, Ministry of Environment, noted that although current legislation had been effective in lowering HFC consumption, leakage rates were recently discovered to be higher than expected. Additionally, HFC recovery rates were found to be lower than expected.

Due to these issues, Baba stated that the natural refrigerant subsidy, which ended in 2016, will not be reinstated at this time.

“Additional time is needed to properly assess the current situation regarding higher than expected f-gas leakage rates and lower than expected recovery rates before we can make a decision on the continuation of the natural refrigerant subsidy,” Baba concluded.