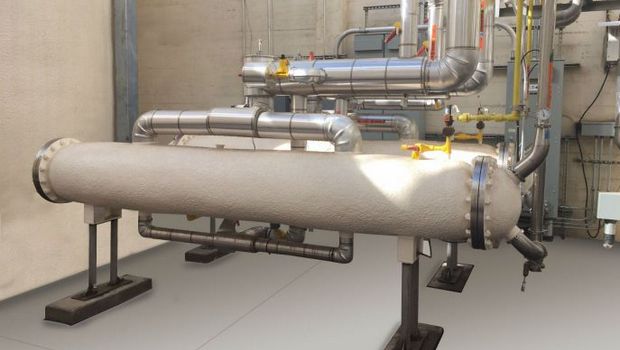 Following more than two years in development, Isotherm, Arlington, Texas, has introduced a new version of its low-charge ammonia SX (shell-and-tube DX) evaporator, this time with an enhanced tube.

The tube, which is enhanced on the outside to facilitate boiling, is designed for secondary glycols and other viscous fluids. A version for CO2 is undergoing testing, said Adnan Ayub, president/CEO of Isotherm, who gave a presentation on the system at the IIAR Natural Refrigeration Conference & Expo in March.

Hundreds of units of the previous version have been sold globally, in capacities between 20 and 1,000 TR, he said.

“Low charge is really being emphasized for ammonia, and that is what motivated us to design this shell-and-tube SX evaporator,” Ayub said. “The charge for ammonia is relatively low compared to traditional evaporator technologies.”

Ayub provided some examples of the new evaporator in field tests. In one case, it is being used at an 80-TR California winery, with wine flowing at 200 gpm, and an ammonia charge of 44 lbs. The temperature is lowered from 65°F to 55°F, with a saturated suction temperature of 35°F.