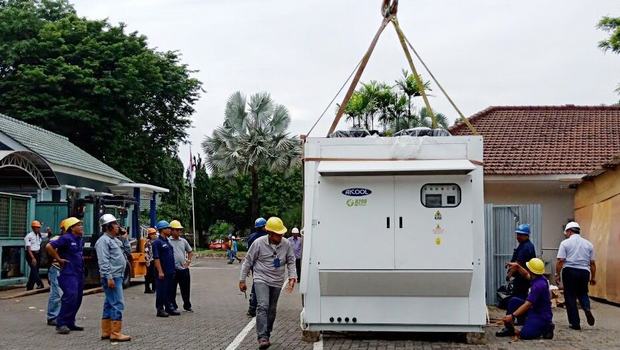 The two chillers each have a cooling capacity of 231.9 kW and each use around 30 kg of propane.

The chillers are used to cool various rooms for storage, drug production, and breeding of bacteria in PT Phapros’ production building.

Though the old R134a chillers were very old systems, with capacities that were significantly larger than needed, the reduction still translates to a cost saving of around IDR 440 million (~$26,300) per year. The company estimates the payback period to be around 2.5 years and its annual greenhouse gas emissions to be reduced by 356 tCO2 per year.

Barokah Sri Utami, president director of PT Phapros, highlighted the role that natural refrigerant systems play in demonstrating the company’s commitment to achieving its own, as well as Indonesia’s, sustainability goals.

“PT Phapros’ vision and mission is to become the leading pharmaceutical company with a strong commitment to social responsibility for our environment,” said Barokah Sri Utami.

The company considers the installation of natural-refrigerant systems to play a central role in a number of programmes it is pursuing to achieve its sustainability goals.

“These programmes span simple actions, from using energy efficiently and cultivating mangrove plants to investing in the two green chiller units for our production plant,” she said.

“PT Phapros’ environmental strategy is in line with Indonesian and global initiatives to mitigate and adapt to global warming and climate change,” she added.

The installation was done as a part of the Green Chillers NAMA project, which is a sustainability initiative commissioned by BMU – the German Federal Ministry of Environment, Nature Conservation and Nuclear Safety – in Indonesia in 2014.

The project’s goal is to actively facilitate the development of Indonesia’s market for green cooling technologies through pilot projects, training, certification, and creating standards.

The Green Chillers NAMA Project is jointly implemented by EBTKE (Directorate General of New Renewable Energy and Energy Conservation) at the Ministry of Energy and Mineral Resources (MEMR) and by GIZ (Deutsche Gesellschaft für Internationale Zusammenarbeit) on behalf of the German Federal Ministry for the Environment, Nature Conservation and Nuclear Safety (BMU).

The Indonesian Ministry of Energy and Mineral Resources is encouraging industry to adopt hydrocarbon-based technology due to its energy efficiency and locally sourced resources and manufacturing.

The R290 chillers were designed and manufactured by AICOOL Air Conditioning and Chiller (AICOOL), a local, family-owned business that manufactures refrigeration and air-conditioning systems.