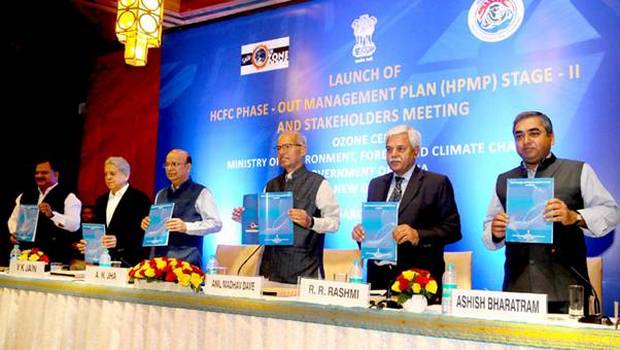 Urging the industry to develop unique products to carve out a niche for India at the global level, the Environment Minister, Shri Anil Madhav Dave, has said that companies must invest a part of their income into research & development (R&D) and do some out-of-the-box thinking. “If money can be invested into Corporate Social Responsibility (CSR), money should also be invested into research to develop unique products that can be used in the future,” the Minister added. Shri Dave pointed out that India is by nature, a land of researchers and the likes of Aryabhatt and Ramanuj are sons of soil and in our blood. “The only thing we need to do is to create an atmosphere and pull out the resources”, he said.

Delivering the inaugural address at the launch of Stage-II of Phase Out Management Plan of Hydrochlorofluorocarbons (HPMP) here today, the Minister underlined the need to create the necessary skills and generate employment too. Recalling the Prime Minister, Shri Narendra Modi’s inspiring ideal of doing the nation proud at international fora, Shri Dave added that the Government will never compromise the environmental interests of India at international negotiations and at the same time, also keep in mind the welfare of the world.

Recalling the success during negotiations at Kigali as a turning point and a success for India, the Environment Minister pointed out that the interests of the nation were always kept in mind. “Just like a captain of the ship keeps a vigil on the compass to check that the ship is sailing in the right direction, I never took my eyes off the compass” (of India’s interests).

A document on the HCFC Phase-Out Management Plan Stage-II was also released to mark the occasion.

In his keynote address, Secretary, Ministry of Environment, Forest and Climate Change, Shri A.N Jha, said that the challenge is how to move fast, in keeping with the changes and to push R&D. He said that three separate agencies have been set up – Technology & Economic Assessment Panel (TEAP), Scientific Assessment Panel (SAP) and Environmental Effects Assessment Panel (EEAP). Special Secretary, MoEF&CC, Shri R.R. Rashmi emphasised that this is a critical stage of the HCFC phase out and that much larger involvement of the industry is needed. He also expressed the hope that the industry will help in making the transition efficiently. Joint Secretary, MoEF&CC, Shri Manoj Kumar Singh said that 2017 marks the 30th anniversary of Montreal Protocol. He also underlined that more than 98% Ozone Depleting Substances (ODS) have been deleted. Joint Director, MoEF&CC, Shri Amit Love gave the vote of thanks. Managing Director, Gujarat Fluorochemicals, Shri V.K Jain and Managing Director, SRF Limited, Shri Ashish Bharat Ram also spoke on the occasion.

The Stakeholders’ meeting discussed the implementation of HPMP Stage II, the Kigali Amendment to the Montreal Protocol for phase down of Hydrofluorocarbons (HFCs) and the post-Kigali developments. India has been a strong advocate of the principle of Common But Differentiated Responsibility (CBDR) in the matter of global actions to protect environment and also that national circumstances need to be factored in for arriving at any durable agreement related to climate. In Kigali, India was able to pilot and secure an agreement that provides adequate space for growth of our economy, while providing adequate time for industry to shift to sustainable alternatives in the interest of environment. The agreed arrangements minimize the cost to consumers in transitioning away from HFCs and provide for domestic innovation to develop in the sector of new generation refrigerants and related technologies.

Under HPMP-II, India has secured 44.1 million USD from the Multilateral Fund for the Implementation of the Montreal Protocol for phasing out 8,190 MT or 769.49 ODP tonne of HCFC consumption between 2017 to 2023, in order to meet the compliance targets under Montreal Protocol for 2020. More than 400 enterprises, including 300+ Micro, Small and Medium Enterprises (MSMEs) in the foam manufacturing sector and 6 large air-conditioning manufacturing enterprises will be supported under HPMP-II for conversion from HCFCs to non-HCFC technologies.

The HPMP II also provides for promotion of energy efficiency, development building codes integrating HCFC phase out issues, cold chain development with non-HCFC alternatives and development of standards for new non-ODS and low GWP alternatives, while transitioning away from HCFCs. It is expected that there would be a net direct CO2-equivalent emission reductions of about 8.5 million metric tonne annually from 2023. It also specifically focusses on the MSME sector in foam manufacturing. Adequate attention has also been given to synergize the Refrigeration and Servicing (RAC) servicing sector trainings under HPMP II, with the Skill India Mission, in order to multiply the impact of skilling and training. According to estimates, nearly, 16, 000 service technicians will be trained under HPMP-II.

Under the Montreal Protocol, the accelerated phase out of Hydrochlorofluorcarbons (HCFCs) is underway with a phase out of HCFCs by 2030. HCFCs presently are being used in various sectors, inter alia including Refrigeration and Air conditioning (RAC) sector, foam manufacturing sector etc. These sectors, as such, are cross-cutting and are directly related to sectors such as urban development, agriculture through cold chain sector, and industrial development. India is undertaking phase-out of HCFCs through the implementation of HCFC Phase-out Management Plan (HPMP). The HPMP Stage-I has been already implemented in the country and has successfully met all the ODS phase-out targets, including those of HPMP Stage-I.

The transition from HCFCs to environment-friendly, technically proven and economically viable alternatives is a challenging task particularly for a developing country. India has voluntarily followed a low carbon development path, while phasing out HCFCs by adopting non-ODS, low Global Warming Potential (GWP) and energy-efficient technologies in its HPMP, which is unlike growth paths taken by many countries in the developed world. The HPMP has been developed in a manner that industrial obsolescence and adverse economic impacts to the industry are minimized and the compliance targets of the Montreal Protocol are achieved.

In the last three decades, the Vienna Convention for the Protection of the Ozone Layer and its Montreal Protocol on Substances that Deplete the Ozone Layer have achieved universal ratification of the 197 member countries of the United Nations. The extraordinary international cooperation of Parties to the Montreal Protocol has led to the phase-out of production and consumption of more than 95 % of Ozone Depleting Substances (ODSs), and has also contributed significantly towards protection of the global climate system.

Among those present at today’s stakeholder meeting were officers of the Ministries and Organizations of the Central Government, State Governments, representatives from industries, stakeholders including NGOs and implementing agencies associated with the implementation of the HPMP II viz. representatives from United Nations Development Project (UNDP), Deutsche Gesellschaft für Internationale Zusammenarbeit (GIZ) and United Nations Environment Project (UNEP) were also present on the occasion.