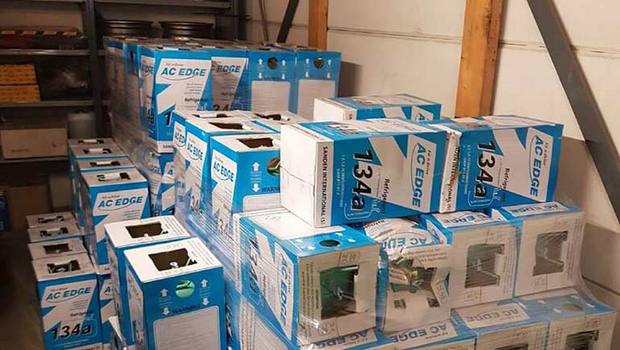 With illegally imported refrigerants continuing to blight the European industry and undermine legislation, Martyn Cooper of the British Refrigeration Association (BRA) explains how to identify them and issues surrounding their use. 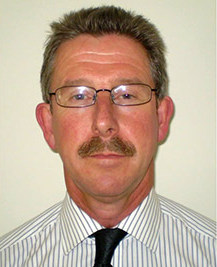 There has been a good deal of coverage in the trade press and on the internet recently regarding the issue of illegally imported refrigerants.

What started out as a few cylinders being sold on eBay has now been revealed to be an illegal trade of much larger proportions; possibly up to 20% of the F-gas quota volume.

It is a well understood fact that the European F-gas quota process has resulted in sharp increases in the price of refrigerants, which has inevitably attracted the attention of those looking to capitalise on the situation. But is that the only issue? Is it just about making money, or are there other issues that we should be concerned about?

Let’s look at a different example. Would you take any sort of risk when you buy medicines? Would you buy them on the black market just to save some money? From suppliers you do not know or from unverified websites? In packages without any clear indication of the source and manufacturer?

The answer is clearly going to be “no” because the risk to your health would be far too high.

With the EU F-gas regulation and HFC phase down, the pressure on HFCs, particularly when they have a high GWP, has increased considerably. Refrigerants have become precious goods. They are essential for the safe and reliable operation of the cooling industry – just as medicine can be essential for life. Therefore, you cannot afford to take any risk.

Firstly, illegal trade undermines the F-gas Regulation’s aim to phase down HFCs. Risks such as refrigerant leakage into the atmosphere increase even further with the use of inadequate cylinders, or illegal disposable cylinders which are not allowed to be produced or used in the EU.

Anyone purchasing F-gases must hold a valid Company F-gas certificate. Sellers cannot sell to anyone who does not have this certification, and must legally record the number of the certificate, the issuing body, and its validity. Most sellers will hold their regular customers’ details in their systems but will also have the ability to check one-off purchaser’s details online via one of the F-gas certification bodies, such as Refcom.

It may be tempting to purchase via an Internet platform, given the low pricing, but how can that seller verify that the purchaser holds valid certification? In a word, they can’t, which renders the transaction non-compliant with the F-gas regulation. Buyers should always ask for evidence that the product is covered by F-gas quota. This will be simple and straightforward for any reputable supplier. So, our recommendation would be to always purchase your refrigerant from a reputable distributor.

Over the last 18 months, FETA has worked with the UK’s Environment Agency (EA) to get offers of refrigerant removed from eBay, with some success. However, it is not just the lack of F-gas compliance that may be an issue.

Much of the product offered on the Internet is quite clearly in disposable (non-refillable) cylinders. These packages have been banned in Europe since 2007, so once again purchasing refrigerant in such packages is against the law.

The other major issue is that of product quality. When buying from a reputable supplier, it will be clear that they in turn purchase their refrigerant from reputable re-packers and gas manufacturers. This will assure you that the refrigerant in the cylinder is exactly what it says on the outside. Product purchased elsewhere tends not to have the same assurance, and it has been widely reported that all sorts of mixtures have been found in cylinders purporting to contain pure refrigerant. Whilst some of these products may be benign, they can affect system performance. In some cases, what is stated as being a non flammable refrigerant has been found to contain significant quantities of flammable products, which presents a significant health and safety risk.

So, the risks of buying illegal refrigerant are high and range from hefty fines to risks for health and safety for installers and users. More specifically, and in addition to the fundamental issue of being non compliant with the EU F-gas regulation, risks are related to:

Fatal incidents occurred in 2011 when technicians working on refrigerated containers died as a result of explosions. These resulted from counterfeit refrigerant being used, which had been contaminated with a flammable product, and hence was not the product the installers thought they were working with.

How to identify illegal refrigerants

The following are helpful indicators to identify potentially illegal refrigerants.

The easiest way to identify illegal refrigerants is by their package. If the cylinder looks like the image below then it is a disposable (non-refillable) cylinder.

Disposable cylinders have been banned in Europe since 2007. They do not comply with ADR Transport Regulations for dangerous goods. This means the cylinder is illegal, and the product has been illegally imported into the EU. As such, there must also be a question as to what the cylinder actually contains.

Engineers in the industry will be very used to using returnable, refillable cylinders which are normally distinguished by their collar and foot ring and look something like this: 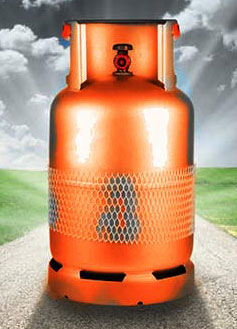 However, these also need to comply with the Pressure Equipment Directive (PED). This requires those filling such cylinders to ensure they are compliant (further information on this can be found in the EPEE leaflet referenced at the end of this article).

New UK government guidance states unequivocally that any supplier of refrigerant using these cylinders must advise how they can be returned for refilling. Unless the supplier provides this information, the cylinder cannot be classed as refillable, and there is every possibility the product could be an illegal import.

Any refrigerant delivery needs to be accompanied by the relevant Safety Data Sheet (SDS) issued by the gas producer/or supplier. Besides many other criteria, the SDS needs to contain the following mandatory information:

All refrigerant cylinders must be clearly labelled:

EFCTC, the European trade association of fluorocarbon producers, has launched a web-based Action Line to report alleged suspect HFC offerings. This has already received many reports of possible illegal activity.

If you are aware of any suspect activity, you can anonymously report the case on the EFCTC Action Line through: https://efctc.integrityline.org

Any information submitted is treated as confidential and is handled by EQS, a trusted and independent contractor. Suspicious activity will be shared with enforcement agencies at EU or Member State level (in order to disrupt the activity), and not with EFCTC members.

In the UK, issues can be reported to the F-gas Support Line at the EA on f-gassupport@environment-agency.gov.uk

This article summarises a leaflet produced by EPEE, together with a number of other European organisations, which gives more details on this topic. This can be downloaded from https://www.epeeglobal.org/refrigerants/illegal-trade-of-refrigerants-leaflet/