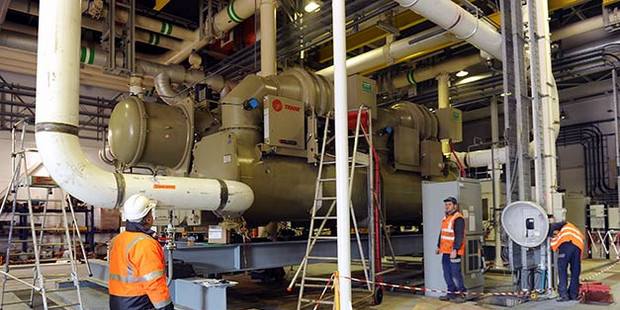 In the largest HFO chiller installation of its kind in the world, Trane CenTraVac’s using R1233zd(E) will replace the existing R22 chillers serving the Channel Tunnel.

Four 10MW Trane Series E CenTraVac water-cooled centrifugal chillers using the new HFO refrigerant are to be employed to cool the Channel Tunnel – once described as the world’s most expensive cooling system.

The new R1233zd(E) chillers will replace the existing eight ageing York Titan chillers that have been providing the cooling requirement for the tunnel which connects the UK and France. The efficiency of the new refrigerant, and the technology gains from the new equipment, are expected to return energy savings of a massive 40%.

R1233zd(E) is non-flammable refrigerant and boasts a GWP of just 1. Trane was the first to adopt the new gas in a range of CenTraVac chillers introduced in 2014.

Faced with a ban on the servicing of R22 equipment, tunnel operators Eurotunnel did consider conversion to an R22 substitute but the age of the existing chillers and the potential for energy savings with new equipment made replacement the most attractive option. R134a was considered but this refrigerant, too, is also under pressure from European HFC phase-down agreements.

The Series E chiller was the first to be designed for use with the new R1233zd(E) refrigerant and incorporates a direct drive centrifugal compressor with refrigerant economiser for improved efficiency. It is said to be up to 10% more energy efficient than the next best chiller available in comparable tonnage, delivering industry-leading efficiencies at both part-load and full-load capacity.

The new chillers are designed to keep tunnel temperatures below 30ºC.

With the York chillers being decommissioned, two of the new Trane chillers have already been installed in the French plant. A further chiller will be installed in the UK shortly, with an option on a fourth in the future.

Although Trane declined to comment on the installation due to client confidentiality concerns, the chillers are thought to be the first units of this size installed in Europe. It is also believed that the chillers were manufactured and shipped from Ingersoll Rand’s Trane chiller factory in La Crosse, Wisconsin.

Refrigerant manufacturer Honeywell, which developed the new refrigerant and markets it as Solstice zd, confirmed that this is one of the largest installations to date in air conditioning, but added that zd is also used in ORC installations, which normally involve much larger charge sizes.

R1233zd(E) was designed as an alternative to the HCFC refrigerant R123 in low pressure chillers. R123 was Introduced in the early 90s as an alternative to R11 in centrifugal chiller applications. Although hugely efficient and popular in large chillers worldwide, it was largely shunned in Europe due to its B1 toxicity after long-term inhalation was found to cause an increased incidence of benign tumours in the liver, pancreas, and testis of rats.

“Solstice zd provides a solution that enables the use of low-pressure, high-efficiency chillers in Europe, said Julien Soulet, md of Honeywell Fluorine Products in Europe, Middle East, Africa and India. “We expect that Solstice zd will be increasingly adopted in large systems,” he added.