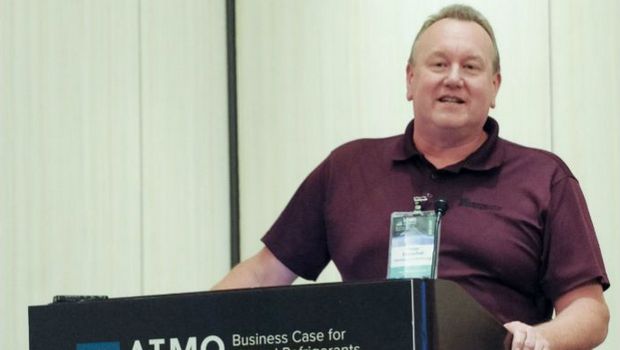 The new facility represents Henningsen’s biggest commitment yet to reducing the charge of ammonia in its warehouse.

During ATMOsphere America 2017 in San Diego, Calif., Pete Lepschat, corporate manager of engineering services at Henningsen Cold Storage, provided data showing the progresss made in reducing ammonia in other similar facilities. In 1993, Henningsen used as much as 52 lbs./TR (26 kg) of ammonia, which was reduced to 16 lbs./TR (8 kg) at the new plant in Salem Ore. (and to 12 lbs./TR (6 kg) at another Salem plant in 2014). In terms of cubic feet of storage space per pound of ammonia, the company went from 223 to 1,823 (6.3 to 51.6 cubic metres) during that time period.

A long journey to get to this point

When Lepschat approached his boss in 2009 about using less ammonia charge in his cold-storage plants, his response was, “Why would you want to do that?”

Ammonia, after all, was inexpensive and operators tended to use a great deal of it in traditional overfeed refrigeration systems. However, there are plenty of reasons to reduce the amount of ammonia used – a safer environment, less regulatory scrutiny and lower insurance costs, to name a few.

So Lepschat set about cutting the ammonia charge in a new facility, and has developed a number of strategies for doing so in standard, centralized systems since then.

To achieve these changes reduction, Lepschat looks at every component of an ammonia system, including the piping, vessels, evaporators, thermosiphon oil cooling and heat exchangers, and asks: “Do we need this component? Does it need to be that big? Do we really need to use NH3 for this part of our process?”

“Every pound is good to get rid of,” he said, adding, “We have met the enemy, and he is liquid”.

In particular, Lepschat replaced a high-pressure receiver from a plant in Gresham, Ore., with a vessel that maintains a smaller level of liquid ammonia and holds it for less time. At the same facility, he installed evaporator coils from Frick that enabled a 2-1 overfeed ratio rather than 3-1. The combined effect of these moves was to use about 5,000 lbs (2,500 kg) of ammonia instead of more than 10,000 lbs (5,000 kg).

At its first plant in Salem, Ore., Lepschat installed an Evapco evaporator with an overfeed ratio of 1.2-1, and employs glycol rather than ammonia in the thermosyphon oil cooling process.

A lot of small improvements can have a big effect, said Lepschat. “Our systems are big, so you do this in 20 or 30 places, and soon that’s adding up to a lot of ammonia.”

Henningsen also prides itself on the efficiency of its plants. The company’s latest facility design operates with an energy consumption of 0.3 kW/cu. ft., less than one-third the industry average. He stressed that efficiency and low charge are not at odds with each other. “An efficient facility will function fine with a smaller charge.”

This new facility addition in Salem will offer more than 60 million total cubic feet (1,699,010 cubic metres) of temperature-controlled space in 11 locations across the United States.