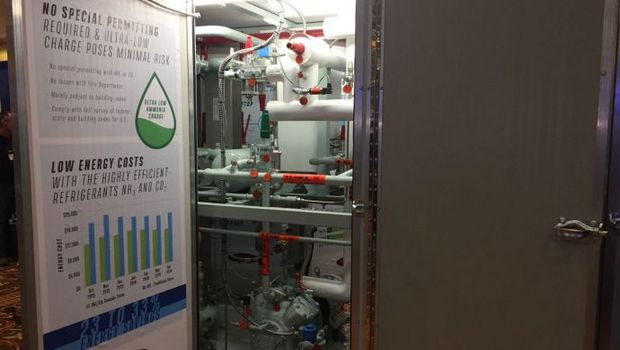 Heatcraft Worldwide Refrigeration has launched a low-charge NH3/CO2 cascade system for industrial applications, based on a similar commercial system.

The commercial system, using a very low charge of ammonia (, 53 lbs, or .76 lb/TR) and 1,400 lbs of CO2, was installed at a Piggly Wiggly supermarket in Columbus, Ga., in 2015. The system was built by Heatcraft division Kysor Warren at its nearby factory in Columbus.

The industrial NH3/CO2 system covers capacities between 100 and 300 TR while the commercial version serves capacities up to 125 TR, said McAdams. The Piggly Wiggly store had an ammonia-cycle capacity of 70TR.

Like the commercial system, the industrial system uses a rooftop low-charge ammonia package on the high side and CO2 on the low side, inside the building.

The store was shown to cut its energy consumption by 33% on average – for a total of $74,640 in savings – over a 13-month period, compared to a similar store using HFC refrigeration.

“I think the interest has been almost equal on both” NH3/CO2 and transcritical CO2,” he noted. But, he added, “most people think it’s still a further leap to go to the larger transcritical systems [and say] I’ll see where I can get to with an ammonia cascade.”