Massive economic losses due to sweltering temperatures brought on by human-caused climate change are not just a problem for the distant future. A study in the journal Science Advances has found that more severe heat waves resulting from global warming have already cost the world economy trillions of dollars since the early 1990s—with the world’s poorest and lowest carbon-emitting nations suffering the most.

Dartmouth College researchers combined newly available, in-depth economic data for regions worldwide with the average temperature for the hottest five-day period—a commonly used measurement of heat intensity—for each region in each year. They found that from 1992–2013, heat waves statistically coincided with variations in economic growth and that an estimated $16 trillion was lost to the effects of high temperatures on human health, productivity and agricultural output. 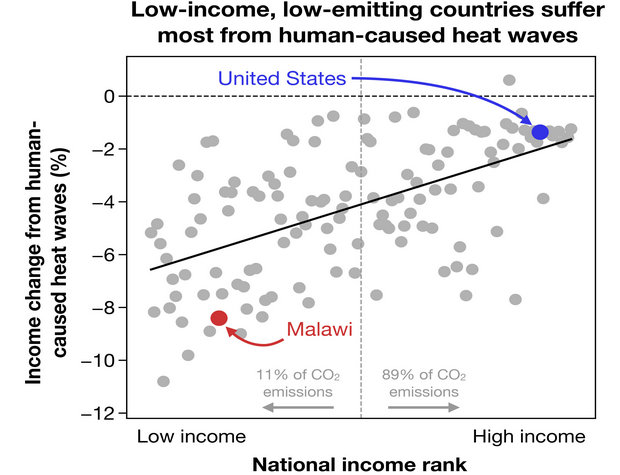 The findings stress the immediate need for policies and technologies that protect people during the hottest days of the year, particularly in the world’s warmest, most economically vulnerable nations, the researchers report.

The study is the among the first to specifically examine how heat waves affect economic output, said senior author Justin Mankin, an assistant professor of geography at Dartmouth. “No one has shown an independent fingerprint for extreme heat and the intensity of that heat’s impact on economic growth. The true costs of climate change are far higher than we’ve calculated so far,” Mankin said.

“Our work shows that no place is well adapted to our current climate,” Mankin said.