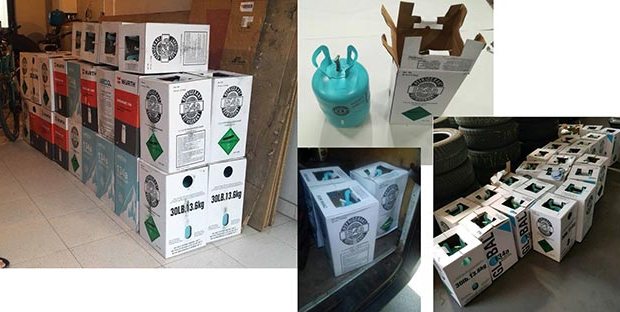 With European authorities still reluctant to recognise the extent of illegal refrigerant sales, the Cooling Post has uncovered large amounts of illegal R134a being sold in Germany.

Launched in 2009, eBay Kleinanzeigen provides an online classifieds experience on a local basis. It claims over 17 million visitors each month, and is already said to have outstripped its sister site eBay.de. Like many auction sites across Europe, the main German auction site, eBay.de, also carries adverts for illegal refrigerant but not in nearly the same quantities as can be found on eBay Kleinanzeigen.

From cities and towns across Germany, R134a is being offered on eBay Kleinanzeigen in illegal 13.6kg disposable cylinders at prices of around €300 to €450. Most appear to be of Chinese origin but some well-known European brands also appear in the mix.

Total quantities available are difficult to estimate but many vendors appear to have access to reasonable quantities with offers of discounts for multiple cylinders and one seller offering lots of 10 cylinders at a price of €3,200. The type of vendor also varies but most appear to be linked to the car auto trade, a large user of R134a.

Other refrigerants, including R404A, R407C and R410A in disposable cylinders are also being offered but, admittedly, not in the same quantity as R134a.

In all the cases mentioned the refrigerant is being sold in non-refillable, disposable cylinders – a type of container which was banned in Europe in 2007. They were banned for valid environmental reasons; in addition to being throw-away items, a “heel” of gas is always left behind in the cylinder upon disposal. In some instances, the heel could be as much as 5% of the cylinder’s capacity.

It is also unclear whether these refrigerants are being brought in under the European F-gas quota system, but their packaging and sales methods suggest they are not.

None of the vendors quote the requirement for purchasers to be F-gas registered. A very small minority quote the previous EU regulation 842/2006 and state: “With the purchase of this product, you expressly confirm that you are knowledgeable in terms of the above-mentioned regulations (ChemKlimaschutzV & EC Regulation No 842/2006) and therefore the use of the refrigerant is carried out by a qualified person.”

As well as concerns that the cylinders, much of it in generic, non-branded Chinese packaging, are not made to European manufacturing and safety standards, there are worries as to the purity of the contents. In 2011, contaminated R134a of Chinese origin caused significant problems around the world. The worst, a deadly cocktail of methyl chloride and R22 sold as R134a, caused a number of explosions and deaths, and grounded thousands of refrigerated containers.

The huge refrigerant price increases in Europe as a consequence of the F-gas phase down, is sucking in illegal gas from outside. Already this month, Greece and Poland have spoken out about the mass of illegal refrigerant crossing their borders and sales on the internet.

The Polish refrigerant association PROZON estimates that at least 30% of R134a currently used in car air conditioning by repair workshops is from questionable or simply illegal sources. With a 13.6kg disposable cylinder of R134a currently available from China for as little as $30 (€26), or less, the potential profits for unscrupulous traders is obvious.