As prices of mid and high GWP refrigerants continue to rise, HFO chiller pioneer Geoclima is convinced that HFOs represent the best mix of performance, safety, cost and environmental benefits.

The so-called fourth generation HFO refrigerants are a key part of efforts to find low GWP alternatives to current HFCs. R1234yf and its close relative R1234ze are both used extensively as components in lower GWP blends, and as single component refrigerants in certain applications – R1234yf in car air conditioning and ze in chillers.

So widespread has R1234ze become that most chiller manufacturers now offer R1234ze options in their portfolio as long-term alternatives to R134a.

One of the most enthusiastic proponents of the technology is pioneering Italian manufacturer Geoclima, the first company to make its mark with the HFO refrigerant in 2011 when one of its chillers using R1234ze was installed at a major UK supermarket.

“HFO1234ze has been a genuine breakthrough and we are now using it in many of our chillers,” said Geoclima president Paolo Ferraris. “Non-ozone-depleting and mildly flammable, it has a LGWP of less than 1 and is safe for intended use.

“Another benefit is that this HFO uses the same technical footprint of its predecessor – the familiar HFC134a – making it easy to incorporate into new chiller designs and reducing the training requirements for engineers and technicians.”

Chillers using R1234ze are becoming standard product for Geoclima and can now boast almost 100 installations. Convinced that HFOs represent the best mix of performance, safety, cost and environmental benefits, Ferraris revealed that his company planned to switch its full production to HFO refrigerants within the next four years.

Despite Geoclima’s enthusiasm for HFO-based chillers, there remain some unconvinced by the technology. “Many companies still gravitate toward the lowest priced chiller option, and there are plenty of budget solutions to cater to their needs,” said Paolo Ferraris. “Unfortunately, their short-term gain will lead to long-term pain, as it is a matter of when, not if, the energy efficiency requirements and the CO2 equivalent quota reduction of the phase-down scheme under the F-gas regulation will lead to a non-gain business with the traditional solutions.”

Although HFO refrigerants are perceived as more costly when compared with other refrigerants, Ferraris maintains that the total cost of ownership of the chiller is lower over the 15 to 18 year lifecycle of the equipment. Many customers are said to report a 20-25% reduction in energy costs with Geoclima upgraded designs and HFO-1234ze compared to their previous chiller.

“The very slightly higher investment cost, which is usually less than 2% of the total cost over the life cycle, is more than offset by the higher efficiency,” Paolo Ferraris claims.

Recent hefty price increases on higher GWP refrigerants is also rapidly moving the market price to a state of parity between R134a and 1234ze.

“We see that more and more customers understand the value of using a chiller with a low global warming potential refrigerant, especially as we’ve seen several significant price increases for high and mid GWP HFC refrigerants. With the upcoming phase down in 2018 by 44% the situation can get even more dramatic.

“We strongly recommend customers to convert to more environmentally preferable solutions now, in order to prepare for the scarcity of high-GWP products anticipated in 2018 and beyond,” said Ferraris. 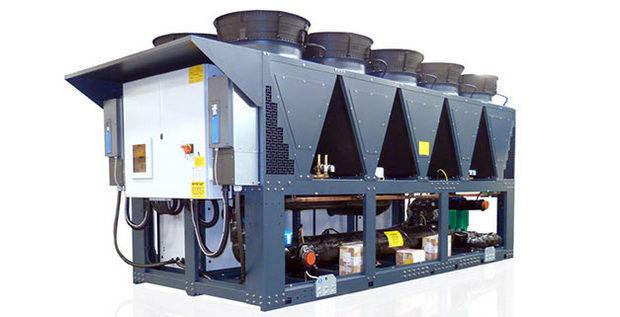 In addition to the restrictions imposed by the F-gas regulations, other measures focusing on energy efficiency are also having an effect on the European chiller market. These include carbon taxation in several countries, the Ecodesign Directive, and building codes. Despite this, Paolo Ferraris maintains that the adoption of the existing environmental legislation and reinforcement by the Member States is disconcertingly slow, and sometimes unclear.

“One reason for its unhurried progression, I suspect, is the lack of market education about LGWP technologies, which is also inhibiting the development and delivery of components to support LGWP systems. We take low GWP as a fundamental factor in the refrigerant choice and would prefer the regulations for this kind of applications to be stricter – and much faster. In Switzerland, for instance, for our chillers in installations of 400kW or more, we see a regulation mandating use of refrigerants with GWP lower than 10.”

Geoclima has a solid regional coverage in Europe, and is now targeting the US with its high efficiency chillers. However, Ferraris sees the lack of market awareness of chillers with LGWP refrigerants being even more apparent in the US.

“Reducing energy cost for the end users of chillers is a big part of the equation. However, having a sense of social responsibility is also important. In my view, we need to do everything we can to protect the environment for future generations,” he said.

“Chiller manufacturers – and the broader industrial sector – must coalesce to raise awareness of low GWP and energy efficiency, and create a supply chain to support it. We need to break down remaining silos of resistance and support legislators and government bodies to help comply with the regulations. Despite the complex challenges that lie ahead, the business and ethical case for low GWP solutions such as HFOs is well worth the effort.”