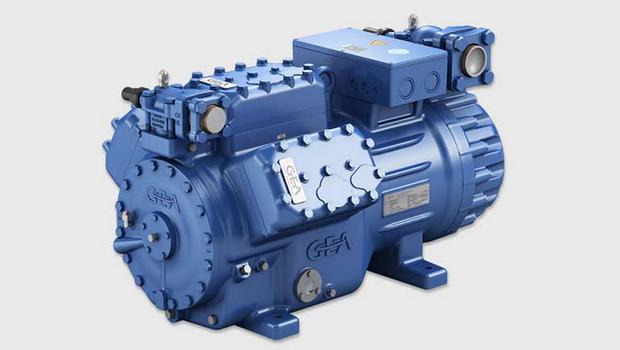 GEA has introduced a new six-cylinder version of its HG66e semi-hermetic refrigeration and air conditioning compressor.

The new compressors are supplied with GEA’s upgraded mexxFlow 2.0 valve plate system. This is said to consist of a valve plate with highly efficient double ring fins and an optimised system of valve plate and cylinder head. This second generation is said to provide even greater resistance and consistently high efficiency.

The adoption of the latest generation of electric motors and improved gas flow in the compressor is said to further increase overall efficiency.

All compressors use GEA’s direction-independent oil pump single-circuit lubrication system, which enables a wide speed control range in operation with frequency converters. Its resulting low oil throw is also said to increase the efficiency of the entire refrigeration system.

The HG66e is approved for the current low-GWP HFC/HFO refrigerants as well as “naturals”.

Thanks to the sliding seat, the stators can be changed on site without special tools, and the oil strainer is also easily removable.